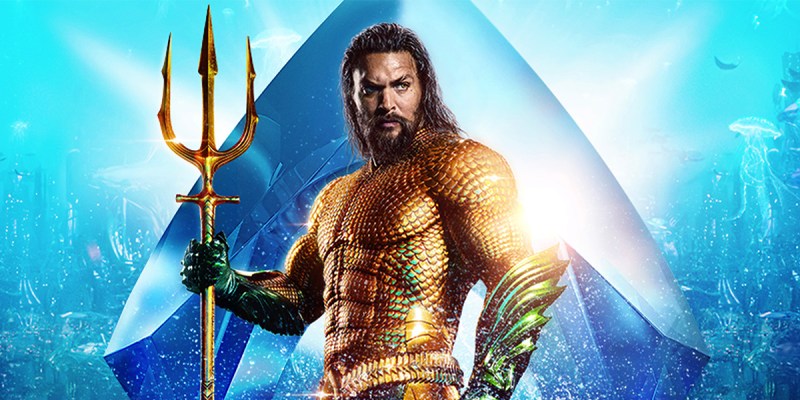 When I was a kid, I used to watch the Aquaman cartoon on television. The main reason I liked taking baths was that I could get in the water and pretend to be Aquaman. I would twirl my hands under the water to pretend to make whirlpools. To me, being Aquaman was cool. However, everyone else saw him as the lame fish guy.

With the new release of the movie Aquaman starring Jason Mamoa, Aquaman is no longer just the fish guy. Aquaman has made the title character what he was always meant to be: one of the most powerful and interesting characters in the DC universe. Director James Wan has breathed new life into Warner Bros. DC Comics properties with his take on this classic character.

Wan has made Aquaman one of the best DC Comic films in a very long time taking away the dark brooding elements that have plagued previous DC Universe films. Wan has returned to the hero in superhero showing his main character in the light and giving him a heroic quest to fulfill his destiny. We first got a look at Jason Momoa’s Aquaman in the Batman vs Superman cameo.

Then we got a full range of what this character would be from the Justice League movie. I must admit, I was not impressed. The character did not seem like the Arthur Curry that I had read about in comic books. This Arthur Curry seemed like a brutish bore. This movie proved me wrong. The Aquaman movie gives Arthur Curry background, personality, and depth. Jason Mamoa portrays Aquaman as a brute because in his world he has always been the most powerful person around.

The cast is completed by Amber Heard who plays Mera and acts as a guide as Arthur discovers more about the other world he is from. Heard portrays Mera as the warrior princess who is loyal to Arthur. The undeniable chemistry between Momoa and Heard moves the story along as it is predominately about their quest to set Arthur as the proper King of Atlantis.

Patrick Wilson does a second outing as a DC comic book character (Watchmen) by playing Orm, Arthur’s half-brother. The misconception to those that do not know the comic book world is that they believe there should be an unfair comparison to the half-brother relationship of Orm and Arthur and Marvel’s Thor and Loki. Orm and Loki are two different kinds of characters from two different comic book universes.

Originally, in the comics, Orm started as the human half brother but over time his origin has been rebooted to the Atlantean half-brother. Orm is not a mischievous trouble maker bent on taking a throne that is not his but an Atlantean born and under Atlantean ways. Orm was trained as an undersea ruler and seeks to strengthen his rule and protect his sea. Orm uses deceit to trick the various Atlantean tribes that they need to unite under his rule for their own protection.

Nicole Kidman also does a second outing in a DC comic book movie (Batman Forever) by playing Atlanna, the Queen and Arthur’s mother. Hers is a tragic story of a Romeo and Juliet type of love that she has with Arthur’s father, Tom Curry played by Temuera Morrison. Both Kidman and Morrison sell this love affair with the limited screen time they are given. William Defoe portrays Vulko who serves as a mentor to Arthur teaching him some Atlantean ways and how to use his powers.

Dolph Lundgren portrays King Nereus, Mera’s father, who is the first King to willingly go along with Orm’s plans of conquest and revenge upon the surface world. Yahya Abdul-Mateen II portrayed Black Manta the typical villain out to get revenge on our hero for something he did in the past that the villain blames him for. Although this is a plot point that has been seen countless times, in this case, the villain is right.

It was Aquaman’s fault Black Manta’s, father played by Michael Beach, is dead. The typical scenario was made better by the fact that you got to see a classic villain come to life on the screen. You got a savage Black Manta with laser eyes and all. All in all, Aquaman was definitely worth the ticket price. I originally walked into this expecting a typical bad DC Universe movie that doesn’t hit the spot with its characters and came out thinking this is how Aquaman should be done and this is a direction that DC should keep with their movies.

Yes, there were a few plot fails like how did Orm and Manta meet to partner up in the first place and how did Vulko become Arthur’s teacher when he was a youth. Minor things that could be overlooked for the sake of moving a story. I’m going to take more baths and be a big kid playing in the water as Aquaman.