ARE WE STILL FANS OR DO WE JUST WANT TO SEE THE CAPES? 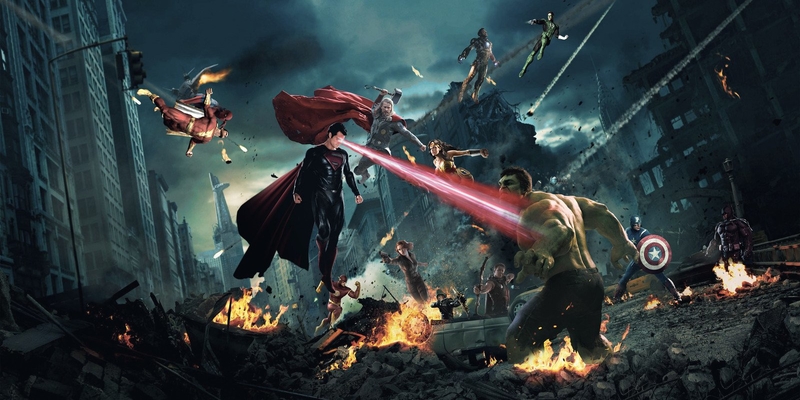 There was a time when comic book shows in multimedia were far and in between. Comic nerds and superhero fans were starving for entertainment other than what was on the pages at their local comic store. There might be one TV show with a guy in a mask one season and another with a lady with a lasso a few years later but that’s all you got. Then you may get one major motion picture with a guy in a cape and two decades later get another movie about a superhero vampire but that was your limit. Yup the pickings were slim.

When comic book heroes started showing up in serials in the 1930s. Flash Gordon, Shazam, Batman and Superman all came to life for about 15 minutes leaving you with a cliffhanger until the next episode. Another popular medium, radio, where every week you can hear the adventures of Buck Rogers and Dick Tracey. With a TV in the 1950s, your home was visited by The Lone Ranger and Superman. As decades past you had a very campy Batman, Wonder Woman, Spiderman, and yes, we had a Hulk. To satisfy our lack of live action we had some of the best classic cartoons. From Marvel superheroes in the 1960s to the Superfriends of the 1970s to G.I. Joe in the 1980s to the X-Men of the 1990s our Saturday mornings and after school schedules was set.

Then something happened. The late 1990s Sony Spiderman movies became a hit. Over in TV land, Smallville, a show about Superman’s beginnings ran for 10 seasons. Then Batman Begins and so starts the Christopher Nolan trilogy. Marvel launches the MCU with Iron Man and from there the industry blew up. Superheroes are everywhere.

There are currently about 16 comic books inspired live-action shows on TV with four more starting next month in June. There are at least 8 comic book inspired movies due out in 2018. These numbers do not include the countless cartoons and kid shows based on comic books and superheroes in general.

The question we now need to ask ourselves is: Has the industry oversaturated the fanboys and girls with the comic book world?

The recent cancellation of Marvel TV’s Inhumans it may signal that this superhero boom may be over. Although Marvel put a decent push for Inhumans by releasing the pilot in IMAX it did not go over well with the fans. It was perceived as too campy compared to the MCU that fans have been used to getting. On top of that, the fate of Agents of S.H.I.E.L.D seems to be a little uncertain. Yes, the CW seems to be going strong with their line up of superhero and comic book shows every night which all have basically been renewed for next year but of all the shows Arrow which was the flagship show that started it all is at the bottom of the ratings. Black Panther and Avengers: Infinity War have topped the box office this year with millions but our payoff for Infinity War is a year away. Will the fans wait that long, or will the attention move elsewhere?

In some respect, you can say that it feels like the industry makers are taking our love for superheroes too far and not giving us the quality that we are used to. Just stick a cape on it and the people will buy it. There’s no need for quality, compelling storyline or character development when you know there will be ticket sales and viewers based on the superhero content. Netflix’s Jessica Jones might have been that show to display this. Overall this Marvel Netflix outing was not up to par with previous shows almost like it was rushed to get the product out to the fans. DC is coming out with its own streaming service called DC Universe in 2018. Set previews of its upcoming show, Titans, has not been sitting well with fans. Already there’s debate about whether this first live action Titans will live up to its comic book predecessor.

The remainder of 2018 promises some awesome things in movie, TV, and streaming. It’s up to us the audience to determine if we are still fans. It’s up to us to determine if we just want to see our favorite characters on the screen regardless of the content. The superhero genre is still booming but whether it’s waning a bit remains to be seen. There are some great plans for comic book superheroes on the big and small screens even past 2020 but the question is will this genre stand the test of time.

2019-10-30
Previous Post: Chasing Dion: Families Sacrifice for SuperHeroes
Next Post: TOP 10 REASONS BATMAN IS THE MOST FEARED CHARACTER IN COMICS