Birds of Prey is DC’s Answer to Marvel’s Deadpool 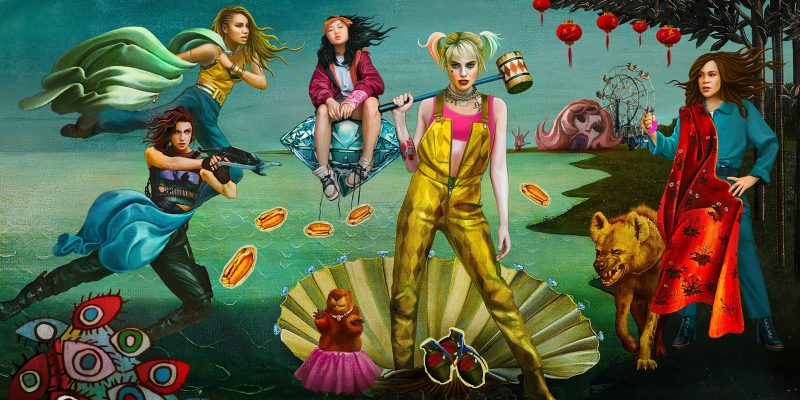 For the third time in a row in the past year, I walked into a DC/Warner Bros. movie with the wrong attitude. I walked in thinking this movie was going to suck. Maybe that’s how I should walk into all of them in the future because this movie far from sucked.

Two things about this review: 1 there are spoilers and 2 there is a hyena.

As a fan of superhero movies, Birds of Prey was DC’s version of a female Deadpool. Yes, it appears that the top execs at Warner Bros. finally realized that their superhero movie making playbook doesn’t work and that they should check out what the competition is doing and maybe cop their style. Harley narrating the story, the fun fight scenes, dark one-liners and the cartoony captions throughout the movie gave the movie that same quirky feel as the Marvel hit.

The full title of the movie is Birds of Prey: And the Fantabulous Emancipation of One Harley Quinn. That’s a mouthful. In a nutshell, though, it tells you the premise of the movie. Harley breaks it off with the Jokers or he kicks her out however you want to interpret the situation. Now with the Joker being the craziest mofo in the DC Universe everyone is afraid of him. Because of this, Harley, Joker’s girlfriend, also has the run of Gotham. Disrespecting Harley is like disrespecting Joker and nobody wants that smoke.

The thing is when Gotham finds out that Harley is no longer Joker’s main squeeze things get real for Harley. Now everyone that has a problem with Harley can take it up with her and not have to go through Joker. Suddenly, it became open season on Harley. Now while everyone’s trying to make a name for themselves by killing Harley, Harley is trying to make a name for herself letting the world know that she does not have to have the Joker to be a villain not to mess with. She blows up factories, killed random people and even brought a Hyena to prove her independence.

Margot Robbie once again pulls off the perfect Harley Quinn. The crazy Joker’s girlfriend who did not first appear in comics but was first seen in 90’s TV’s Batman Animated Series then introduced into comic book continuity to rise into the DC sensation she is today. Margot Robbie’s live-action Harley Quinn first appears in 2016’s Suicide Squad and has been a standout character sense. But the results were perfect because there no one else that could have brought this character to life. With Birds of Prey, we get a full backstory on what makes Harley Quinn tick.

And just like when she was first introduced in the Batman Animated Series, she had a pet hyena. You really can’t beat that. This did not only serve as a coming to age movie for Harley Quinn, but Birds of Prey also introduced to the screen some very important characters to this DC Universe. The Huntress was the classic story of an anti-hero whose family was executed by the mob and she needs to get her revenge. Detective Renee Montoya was a woman cop working in a man’s police station not getting the respect she deserved. She had to prove herself.

Black Canary was a legacy hero. Her mom was a hero before she died and Black Canary was a good person trying to survive without following in her mom’s footsteps. To round up the gang was Cassandra Cain, the little pickpocket that everyone in Gotham was after. The thing I liked about these characters is that except for Cassandra Cain all the characters stayed close to DC book continuity. Mary Elizabeth Winstead, Rosie Perez, and Jurnee Smollett Bell were excellent in their portrayal of the characters from the book.

Every comic book movie follows the same formula that a good villain makes a good movie. Ewan McGregor as Black Mask filled that tall order. The right amount of gangster and crazy made Black Mask an unpredictable villain which is what is needed for an unpredictable lead such as Harley Quinn. As a villain, Black Mask didn’t come alone. Chris Messina played the slice and dice villain Victor Zsasz and the main right-hand man to Black Mask. At some point in this movie, they seem to allude to the two stars having more than just a working relationship.

Had this been explored it may have added a new dynamic to the movie. In Birds of Prey, DC/Warner Bros. kept the characters close to the source material. Mostly all the characters had close ties to their comic book selves. In previous movies, this did not seem to be the concern. That narrative seems to have changed for the better. Making Black Canary a legacy hero and Huntress a long thought dead mobsters’ daughter out for revenge where great nods to the source material.

Since this was not the original Birds of Prey like in the comics that started with Barbara Gordon/Oracle and Black Canary I must admit I walk in nervous about this getting messed up. I wanted Oracle because in my mind you can’t have a Birds of Prey team without her. I was proven wrong. A big relief was not putting the Jared Leto Joker in this movie. They told a story with the Joker in it without using the actual character. Let’s face it, Jared Leto’s Joker was probably the worst part of Suicide Squad but to be honest if this article was not about that movie, we could definitely find other worst things.

Did I mention there was a hyena just like in the DC Injustice video game? How cool is that? What I didn’t like was the handling of the Cassandra Cain character. In the comics she was an assassin who’s fighting prowess was only second to Lady Shiva and Batman. Cassandra Cain was also mute and had to learn how to communicate through speech because her main form of communication was to read the body language of others. This was slightly disappointing not to be able to watch her fight and be reduced to the whiny kid in need of being rescued.

Another big miss was not using the Poison Ivy character. In comics and in the DC Universe cartoon series the two are the best of friends. This is a miss that should be corrected in the next Harley Quinn movie that comes out. Come on, you know there’s got to be another. When I first heard of this movie coming, I was not looking forward to it. I honestly thought it was going to be trash. I never thought I would be writing this review in this way but so far in 2020 Birds of Prey is the movie to see. Don’t read the bad reviews, do what I did and make up your own mind about this movie. But please go see it.

While you’re at it you can see how they put a pet hyena in the movie and made it work. Never seen anything like that.