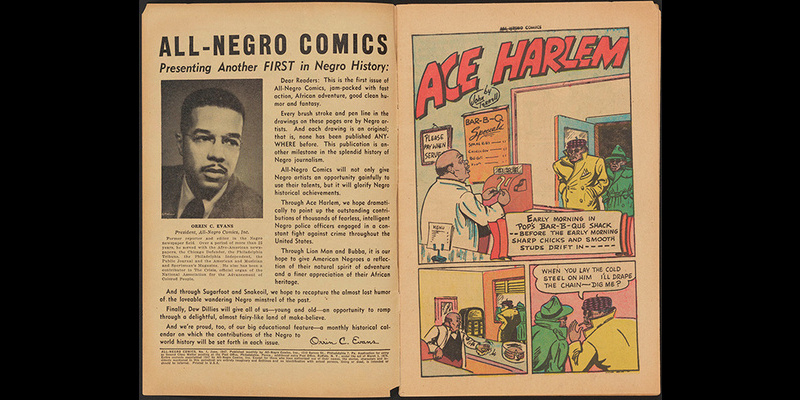 Remember the name Steamboat. I want you to remember that name because it is the name of a character that is hard to find information on. This is a character so foul that the comic powers that be are trying to erase the memory of this character. Steamboat was an Afro-American character created in the Fawcett Captain Marvel books that were so offensive that his very existence was protested during a time of Jim Crowe and segregation by integrated groups.

The character appeared as Billy Batson and Captain Marvel’s valet from 1942 to 1945 and was created by C.C. Beck in an attempt to appeal to Black readers. This was a miserable fail and the protest forced the comic to discontinue the character never to be seen again. The point to this story is for a long time in comics minority characters had a hard time being represented in comics because minorities were not writing them.

In the 60’s and 70’s you still had the same problem. Even Black and Latino superheroes were first introduced on the cover of comics they first appeared in as villains. Once you bought the book you would read that they were actually this misunderstood hero. However, the perception is that they are the villain. Since you didn’t have the proper representation on the creative end most minority characters were seen as stereotypes.

In 1947, two years after Steamboat was banished into comic book oblivion, there was Afro-American representation in the comic book world. In 1947 All-Negro Comics hit the stands. A book that was written and drawn solely by African Americans. All-Negro Comics was the brainchild of Orrin Cromwell Evans.

Evans was a journalist who was a strong supporter of racial equality and thought that he could reach a broader audience with a comic book. All-Negro Comics was unlike any other book in the 1940’s, because, it projected Afro- Americans in a more positive believable role. Most comic books of that time were written by Whites and showed Afro- Americans in a negative and stereotypical light.

All-Negro Comics was a variety of different titles which included:

*The Little Dew Dillies, a children’s feature starring cherub-like creatures only babies can see and talk to.

*Lion Man and Bubba, starring a college-educated African American sent by the United Nations on a mission to a uranium deposit on Africa’s Gold Coast.

*Lil’ Eggie, about a henpecked husband Egbert and his wife.

Unfortunately, there would not be another issue. There were plans to put another issue out in 1948 but Evans had problems getting the newsprint needed. The speculation is that White competition purposely made it hard for Evans to get his second issue out. So, the first comic written and drawn by Afro-Americans only had one issue.

One issue with no characters resembling Steamboat.

However, the importance of this is that now it was seen that this could be done. You could make minority characters star as the hero of a comic book and not let them be stereotypes of that culture. No, Steamboat was not the last character of his type. Yes, there was a continued effort to make stereotypical characters throughout the 40’s and 50’s but in the 60’s you started to get characters that weren’t stereotypes.

Then you got Black Panther and Luke Cage from Marvel. You got Tyroc, John Stewart Green Lantern and Black Lightning from DC. Then you got the legendary Milestone line written about minority characters from minorities themselves with characters like Static.

But first, you had All-Negro Comics to pave the way.

2020-02-27
Previous Post: Birds of Prey is DC’s Answer to Marvel’s Deadpool
Next Post: What To Watch While Quarantined