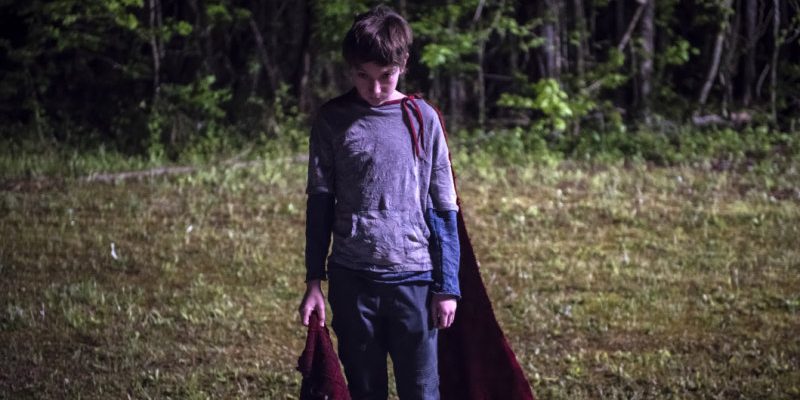 Brightburn made no secret about being Superman plus the Omen, and still managed to throw twists to the audience. Brightburn paid homage to Superman throughout the film. After his ship crashes at a Farmhouse, the alien baby, named Brandon Breyer is raised by loving parents who were battling infertility.

Fitting the theme of evil Superman, Brightburn warps a few recurring Superman themes, while adding the thrills of horror and slasher films. In Brightburn, Brandon Breyer’s lifts a truck like the iconic Action Comics, except he drops the truck on the street as a murderous act. He toys with his Uncle as the uncle flashes the lights, Brandon is on the ground, flashes again, this time he is levitating, then gone.

He picks up the truck and drops it, his jaw breaks off against steering wheel. This gruesome scene was the first instance of Brandon cutting his family ties. Throughout the film the audience learns more about Brandon Breyer’s “gifts.” He proves to be exceptionally smart while discussing the difference between wasps and bees in the classroom.

This class discussion foreshadows much of the film to come. Brandon describes the wasps as aggressive predators, which he soon becomes. The hive mind also hints at the power of the spaceship and it’s ability to control Brandon Breyer. It is also disclosed that Brandon has never been sick, never bruised or bled.

As he reaches puberty, his 12th birthday, the spaceship begins pulsating and communicating causing him a seizure. After the seizure, he wakes up and jumps out his window, hitting the ground. In the next scene, he moves at superspeed, showing no signs of damage as he heads toward the barn. His mother finds him yanking at the trap door storing his spaceship.

Brandon has seemingly blacked out. The next day he throws the lawnmower like a football. As he investigates the mower, he slides his hand between the rotating blade, breaking the blade. By this point it has been revealed that Brandon Breyer is smarter than most, apparently invincible with superhuman speed and strength.

So, it comes as no surprise later in the film when Brandon announces his superiority to the guidance counselor, his aunt. Brandon Breyer’s perversion leads him to become a superhuman stalker and serial killer. After an anticlimactic birds and bees talk, Brandon takes his father’s advice about giving into his urges.

So that night he flies into his crush’s bedroom, starts playing a song on his crush’s laptop, then using his superspeed to appear ghostly as he opens the laptop and starts the music again after she closes it. She saw him in the blinds, but as she called for her mom, he flew out the window. The next day she calls him a pervert in gym class, so he grotesquely breaks her hand and arm.

After this incident, his mom, Tori, admits the truth about his origin to Brandon. He does not handle this well and is now one step closer to becoming Brightburn. He arrives at his crush’s house and delivers a chilling message then proceeds to attack her mother at the restaurant. In true horror fashion, he leaves the Brightburn symbol all over the glass.

Then breaks glass lighting above her head so glass shard gets in her eye. With one eye seeing completely red, the scene has a horror feel as he uses super speed to scare his prey. Finally, she locks herself in fridge, prompting him to use laser vision then super strength to rip open the door. The police declare her missing, as Brightburn has relocated her and performed a dissection.

The beginning of the end of Brandon Breyer occurs in a scene that eerily felt like the pivotal scene in the Walking Dead when Rick Grimes kills his best friend Shane. Kyle, Brandon’s father, accepted their son’s evil ways before his wife, so he decided it was his responsibility to end Brandon’s reign of terror.

As Brandon looks at deer tracks, Kyle cocks back the hunting rifle and fires it directly into the back of Brandon’s head, the impact does no damage. Brightburn is truly born in this moment, he flies around, taunting his dad then knocks him over, and proceeds to shoot eye beams through Kyle’s head and skull.

Brightburn starts with Tori, Brandon’s mom, playing hide and seek by whistling before school, and he pops out in the barn behind a barrel of hay, setting up the ending of the movie. The last time Tori can reach her son, Brandon occurs when he is again drawn to his spaceship, repeating a phrase, “Take the world.”

The birth of Brightburn culminates as Tori calls Kyle to warn him about the pictures she saw, but Brandon answers while levitating above the house. Brightburn starts ramming the house while she calls 911. As they arrive Birghtburn flies through the sheriff, very similar to a scene in the Boys. Then violently flies up and down slamming other cops head into the ceiling then throws her into room where mom is hiding.

Whistling as he looks for Tori, Brandon Breyer has fully transformed to Brightburn, and his mother finally realizes she must try to end his reign of terror. She sneaks outside the window, then runs to the spaceship. She grabs a piece of the ship and starts whistling. She coaxes him into a hug and goes to stab him, but he catches her arm. Flies her through the roof into the stratosphere then drops her.

Killing his connection to humanity, and thus his humanity. Instead of saving a plane about to crash like Superman, Brightburn forces a plane to crash into his childhood home to cover up the deaths at his superhuman hands. Brightburn does a great job of interweaving the horror, slasher, and superhuman genres.

Brightburn was full of amazing visuals, from the ominous scenes of him floating in the window of his aunt’s house to the talented artwork he drew documenting his crimes, and his future goals; such as him floating about Earth and his eye beams to blow it up, and another with skeletons in a burning Earth underneath him.

This film becomes even more tantalizing at the end. The end credits display a few news reports with Brightburn destroying an office building, floating above a forest fire, then his Brightburn symbol as a crop circle. Then, a conspiracy theorist by the name of Big T screams about the government hiding the truth about Brightburn.

Then drops the bombshell of other super villains. As he mentions a half man, half sea creature destroying ships, a creature with glowing green eyes is shown. The conspiracy theorist also mentions a being that chokes men with ropes and chords, perhaps this universe’s evil versions of Aquaman and Wonder Woman.

On the screen behind Big T, there is a red costume with yellow emblem, presenting a twist to build fans excitement. That suit belongs to the Crimson Avenger, the main character from ‘Super.” Also, the name of the restaurant Brightburn attacked was named, Darbo’s.

The main character from Super’s name, Frank Darbo, a vigilante with the aggression and penchant for violence of Batman, without the brains and fortune. Brightburn’s ending opened the door for the first Super Villain focused cinematic universe, posing the question, “Will evil aliens Take the World?”