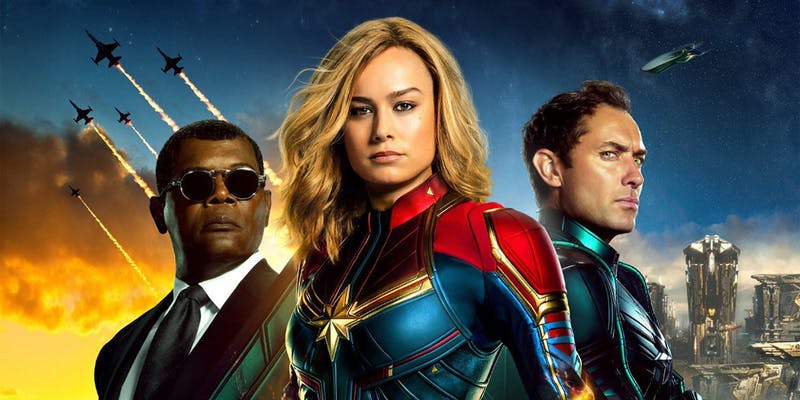 We finally have a female lead superhero in the Marvel Cinematic Universe. Awesome. I realize that we normally do spoiler-free reviews but, in this case, it was hard to do without giving this movie a fair review and letting you know what I thought. There is too much going on and its relation to the rest of the Marvel Cinematic Universe. I’m going to start with the elephant in the room. You want to know whether I liked it or not. Yes, I liked it. Truth be told it wasn’t’ the best Marvel movie but it was good. It did what it was supposed to do. But let’s break this down a little bit

Watching Captain Marvel reminded me of watching the movie Solo from the Star Wars franchise. It’s a prequel to the franchise that must tell a story yet fit into what was already done. Like Solo, this was a good movie however it was weighed down by obligations it had to make to the whole franchise story that has already been told and still needs to be told. We’ll do a Star Wars story in the future but now we are talking about Captain Marvel. So, this story takes place after Captain America: First Avenger but before Iron Man and after Peter Quill got kidnapped to space. The year is 1995.

Captain Marvel told a story of how Air Force pilot Carol Danvers received her powers and became Captain Marvel. It was a coming of age story of a woman who was deceived and commanded control of her life from her oppressors who had lied to her about who she was for over 6 years. It’s a classic and somewhat predictable story of deceit and lies. You know where this movie is going while watching but that doesn’t mean it wasn’t good. It was good for what it needed to do. This movie’s sole purpose was to introduce Captain Marvel and give her a place in the Marvel Cinematic Universe and to fill in some gaps for the Marvel Cinematic Universe itself. For that purpose, this movie did exactly that.

In the MCU, Carol Danvers had a best friend in the Air Force named Maria Rambeau who, because they were women in the ’90s was not allowed to do anything but test airplanes for the service. During this time, Carol befriended an Air Force scientist named Wendy Lawson who was developing a new plane for the Air Force. So, Carol thought. Lawson was a Kree scientist named Mar-Vel who came to Earth to help Skrull refugees. The Kree and the Skrulls were alien races at war. After a test flight went bad in an experimental plane made by Lawson the two crashed because the Kree attacked looking for Mar-Vel.

When the plane explodes, Danvers gets powers from the energies that made the plane special and the Kree took her unconscious body and implanted false memories. This was to get her to fight for them. Then 6 years later a Kree mission goes wrong and Carol is kidnapped by the Skrulls and interrogated and eventually escapes and ends up back on Earth. She meets Nick Fury, gets her memory back and fights against the Kree who are really the bad guys in this story. She gains her freedom from the Kree, helps the Skrulls and becomes Captain Marvel. Simple story but there’s more. So much more.

This story needs to tie in with the rest of the MCU to serve as a prequel to the next Avengers movie, Endgame. To do this the writers go to the one thing that has been a constant on Earth since Captain America: First Avenger: the tesseract. The tesseract is the glue that holds all the MCU stories together. The tesseract is what was harnessed to power the ship that Lawson and Danvers flew during their fateful crash. The energy from the engine of that device is what gave Carol Danvers powers. This is the same tesseract that was in Captain America: First Avenger and Marvel’s Avengers. This movie shows what happened to the tesseract between those two movies and how because of the tesseract and Captain Marvel, Nick Fury came up with the Avengers Initiative.

One of the good parts of Captain Marvel is the buddy cop movie that you didn’t really see coming, Samuel Jackson’s Nick Fury and Brie Larson’s Captain Marvel had chemistry that carried this movie much further than it should have. In Captain Marvel, we get a much younger Nick Fury with two eyes. He’s not top cop but on his way. This younger Nick Fury is not so jaded and secretive as the one we are used to seeing. This Nick Fury has more levity. This levity does not take away from the effectiveness of the character. He is still formidable in combat and is every bit the hero at times where Captain Marvel is busy elsewhere.

Another good is the display of the powers of Captain Marvel. One of my concerns was being able to show such a powerful being and relate her to the big screen. At first, her powers were hampered by a Kree device but once she was able to fight back against that she was able to realize her full potential. In comics Captain Marvel is one of the most powerful beings in the galaxy and this was clearly shown. The special effects were well worth the wait. Another good was the relationship with Carol Danvers best friend, Marie Rambeau played by Lashana Lynch.

Once again, the chemistry between the actresses sold the story. You believed that these were the best of friends. Added with Akira Akbar who played Marie’s daughter who called Carol her Aunt, this became a solid back story. But Monica Rambeau was not just a character thrown in for cuteness. In a possible future of the MCU, this little girl will grow to be the next wave of superheroes. In comics, this character is the first woman to take the mantle of Captain Marvel debuting in Amazing Spiderman Annual #16 in 1982. Hopefully, we see a grown-up Monica become the hero she was destined to be

The Not So Good

As an old school comic fan, I was looking for the wink. You see, in comics before Carol Danvers became Captain Marvel, she had other identities. In comics, she did get her powers from an explosion however she first called herself Ms. Marvel. She had a specific custom that I thought deserved a wink. I could understand where the Ms. Marvel thing might confuse some because there is a new younger hero calling herself Ms. Marvel in comics. However, her costume isn’t the same and nod would not have killed the movie. I was disappointed in the Stan Lee cameo. Marvel did an awesome job of dedicating the Marvel opening montage a tribute to Stan Lee that was extremely cool and I can’t see a fan not liking that opening. But then came the much-awaited cameo.

Since Lee passed away in 2018, it had been public knowledge that he had filmed some of his fan-favorite cameos for at least Captain Marvel and Avengers: Endgame but this cameo, compared to others of the past was weak. There was barely a speaking part for Stan the Man, just a smile at our heroine. This was cleared up for me by watching a YouTube video by Kevin Smith. The director and actor who had close ties to Lee was told ahead of the movie release by producer Kevin Feige about the cameo. Feige had told Smith that this cameo was centered around Mallrats, a film made by Smith in 1995 in which Lee appeared.

The scene is Lee rehearsing his lines when our hero comes across him and suspects that he might be a Skrull. Now if you listen really close you hear Lee repeating lines, he must learn for the movie Mallrats and when he is approached, he just smiles. Apparently, this cameo was filmed a few months before his death and his health was not good enough for his voice to sound strong enough. Feige had called Smith to not only tell him about the cameo in relation to him but to ask if there was any audio of Lee saying the line. Lee doesn’t speak in Captain Marvel, what you are hearing is audio from 1995. In any event, Smith was honored and emotional about this cameo for obvious reasons. Hearing this story also made me rethink that this was a weak cameo.

The cat. I had a problem with the cat. For a plot point to hold a bit of significance you introduce this character out of nowhere and the only thing I could think is “where is the cat now?”. It was established that this was an alien cat so we can’t expect it to have the same life span as an Earth cat. This was a loose plot device kind of like Han Solo’s love interest in Solo. Where has she been all this time? This is one of the things that correlated these movies for me and is the problem when you insert a prequel that takes place between movies. It’s hard to insert plot points that were never seen before that has relevance on the whole storyline.

Overall, I think this is a good movie which adds further to the MCU. The sometimes weak and transparent plot was saved by the actors and the chemistry they were able to convey. With Captain Marvel you can tell a lot of other stories, one specifically where has she been all this time. This was a great story to lead into the much-anticipated Avengers: Endgame. Necessary because it all points to Captain Marvel being a huge factor in saving the day and defeating Thanos. So, here’s to hoping there is a bigger pay off to this movie in Avengers: Endgame.

Leave a comment and let us know what you think of Captain Marvel.

2019-03-13
Previous Post: Doom Patrol: Weird is Cool
Next Post: Diverse Superheroes That We Need to See In Live Action