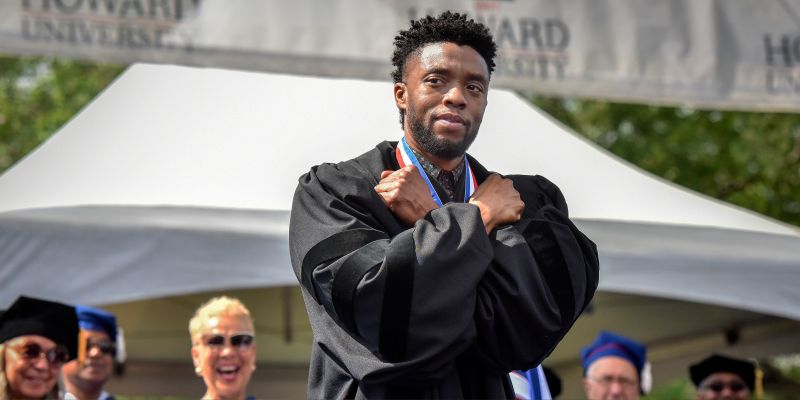 Last week the entertainment industry and the nerd community were rocked by the sudden passing of actor Chadwick Boseman. Chadwick Boseman was known for many roles throughout his career but gained worldwide fame with his portrayal of King T’Challa the Black Panther.

Chadwick Boseman had many roles playing historic icons. In 2013 he played the legendary baseball great Jackie Robinson in the film 42 showing the discrimination that the athlete went through being the first African American to play in the MLB. In 2014 he played the legendary godfather of soul James Brown in the movie called Get On Up.

This movie gave us insight into how James Brown became the legend that he is today. With all those great roles Boseman did outstanding work, but he is most known for playing King T’Challa/Black Panther in the 2018 blockbuster hit Black Panther. Before he appeared as Black Panther in that movie though he first appeared in the role in Marvel’s Captain America Civil War in 2016.

After Civil War he filmed Message From the King, then Marshall, after which he portrayed Black Panther in the title movie then Avengers Infinity War then Avengers Endgame. The last two Avengers movies were filmed back to back as they were two parts of the same story. Chadwick then filmed 21 Bridges and Da 5 Bloods.

The last project he is listed as filming, Ma Rainey’s Black Bottom, has yet to have a release date I state all this to say that in 2016 Chadwick was diagnosed with stage 3 colon cancer. Primary filming for Civil War was early 2015 and the movie was out in 2016. As we all know once you film a movie you are not done because there is still press to do once the movie comes out.

From 2016 until 2020 Chadwick Boseman was either filming a movie, promoting a movie, showing up at award shows, making other public appearances while dealing with his cancer, and the treatment and surgeries. The world did not know. In 2020 his colon cancer progressed to stage 4. The world still did not know. We did not see him complain. We did not see him become bitter. We saw nothing but class.

Just a few months ago, Chadwick posted a video on Instagram giving his support to Operation 42, an initiative to help hospitals serving the African American communities during the pandemic. Because he looked so thin in this video, most of the public made jokes about him looking sick and possibly being strung out on drugs. Yes, social media was being cruel as usual. The comments were brutal.

Chadwick Boseman, however, did not respond to the negative comments and did not explain his appearance. At this point, it is safe to say he was aware of his condition and the severity of it. He kept it classy. He took down the post. We did not see him retaliate. We did not see him complain. We did not see him become bitter to the public and his fans. He took it down and we saw nothing but class.

We saw a true hero. Not the fictional character but a real man living and dying with real-life issues and doing it with dignity. This is what a true hero looks like. Not the guy in the special suit with the superhuman powers that we idolize on screen but the guy suffering from cancer in private while visiting young people to encourage them to fight on.

The guy who in the middle of his treatments gave an outstanding commencement speech to the graduating students at Howard University encouraging them to push forward. Chadwick Boseman played legendary heroes in history like Jackie Robinson, Thurgood Marshall, and James Brown.

Chadwick Boseman played a superhero that took the world by storm and gave young Black boys and girls someone in the superhero fantasy world to look up to and that they could identify with. With all these iconic figures and heroes that he played in truth, it seems that Chadwick Boseman himself was the real hero.