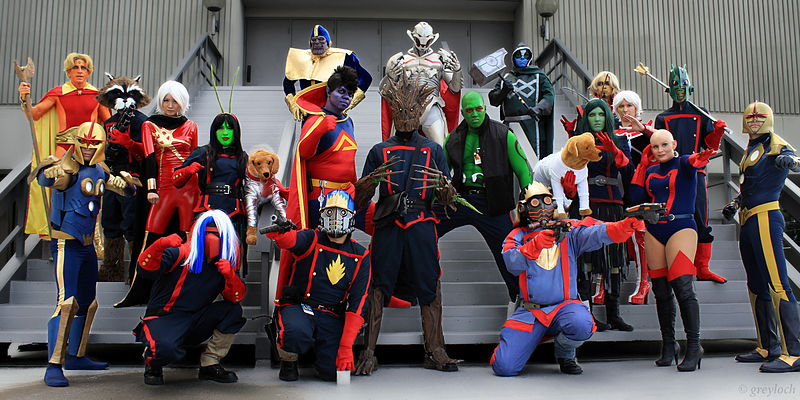 Cosplay culture is one of the most popular aspects of Comic Conventions. However, this display of fandom is found at many types of conventions. From anime to horror to video games, cosplaying is growing in popularity. Some fans and professional cosplayers spend countless hours planning and creating cosplay suits. They will pay hundreds of dollars for materials such as foam and garments, and even more for wigs and makeup.

These lavish, extravagant and intricately detailed cosplay suits can be intimidating for beginners or prevent some from participating. The message from this “Budget Cosplay” panel at Wizard World Philadelphia was captured in a statement by Super Kaycee, “There is no wrong way to cosplay.” Michael “Knightmage” Wilson, started cosplaying in 2012. His origin story began at a party, where he was invited to Cosplay at upcoming charity events.

Then he attended his first Comic-Con and became addicted to Cosplay. Yet this professional does not break the bank while creating these awe-inspiring suits. He announced to the crowd, he spent $200 or less, and 4 days or less, to make his over 150 cosplay suits. While you can acquire top of the line suits and wigs from websites like Arda and Epic Cosplay, Super Kaycee and Michael Wilson recommend scouring goodwill and thrift stores for materials. Michael noted once he began cosplaying, “It began to open creativity when looking at regular items,“ while walking through dollar stores. Which I, as a beginner, put into practice.

I made my first cosplay outfit the day before attending this panel, so I could raise my hand when Super Mage, “Knightmage” and SuperKaycee, surveyed the audience to discover, two people had spent over $300 on a cosplay, while a handful of fans, including myself spent $50 dollars or less. Last year I purchased a Flash jumpsuit for $60. I promised myself I would cosplay as Black Bolt, from Marvel’s Inhumans, this year.

My financial situation did not allow me to purchase a base body suit or high-end material. So, I stopped at a dollar store in Philly after leaving the convention Friday night. I bought a barbecue fork, a du-rag, and a few rolls of aluminum duct tape all for $1.29 each. These items I used to make the helmet. Then I spent three dollars on an umbrella, then cut the lining to make a cape.

I bought a pair of pants from Wal-Mart for $7 and a pair of boots for $20. I spent a few hours, and when it was finished, I was slightly nervous. Feelings of anxiety wondering if the other fans would recognize my portrayal of my favorite comic book character. The result was a handful of recognition, and even one picture, which I never expected. A lesson, Super Mage, instilled in the audience, cosplay is not about perfection, it is about expression.

Another common misconception involves purchasing base suits as opposed to making them yourself. Beginners can be under the impression, if one does not make their own suit, then it “doesn’t count.” But SuperKaycee mentioned, making these base bodysuits is the livelihood for some artists. Purchasing body suits and wigs will help support local artists and small business owners.

These can be found on websites like Amazon, eBay, Etsy, Wish, as well as on social media groups like Heroes for Hire Facebook page. This is where cosplayers network. One example they gave, if one knows how to do makeup, but does not know how to sew, and cannot afford to hire someone to sew, they can reach out to another cosplayer. This networking allows cosplayers to learn skills they don’t possess yet and pay it forward by teaching the skills they have acquired.

There are also innumerable tutorials on YouTube to guide beginners as they make their first cosplay suits. Wigs and makeup are the two materials which the hosts suggested spending a little extra to ensure the best quality. Wigs can be hit and miss, they recommend reading the reviews of wigs for sale, as well as entering “Cosplay Wigs,” into search engines to give the best chance of receiving a wig that will capture the look of that character.

You can even buy wigs, then go to a beauty school to have the necessary hairstyle. These beauty school students are looking to add hours towards their certificate, so it is a win-win for all parties involved. Like hair stylists do for their trade, SuperKaycee suggested investing in a quality pair of scissors for fabric and foam cutting. EVA Foam is the material used as the base mold for many of the jaw-dropping costumes seen at comic conventions.

From the Iron Man Suit to Thor’s Mjolnir to Gundam war suits, EVA foam is the most cost-efficient foam to purchase for cosplay needs. Other items needed to combine foam parts would be hot glue and/or contact cement. If using contact cement, be sure to apply in well-ventilated areas as it is toxic. Cosplays can also use shelf lining to prevent slippage and chaffing. Don’t let the idea of being uncomfortable for hours rub you the wrong way. When you see a child smile at the site of your suite, it will be all worthwhile.

The notion of having to spend a lot of money to create a great cosplay is just one common misconception of cosplayers. “Cosplayers can be seen as vain,” mentioned co-host, SuperKaycee. Most female superheroes and villain characters are cladly dressed, so female cosplayers often adorn cosplay which ranges from revealing to provocative. Thanks to the natural inclination of humanity to pass judgment, many onlookers take the unfortunate perspective these women expressing their fandom are just looking for attention or trying to flaunt “what their momma gave them.”

These women are fulfilling their desire to portray characters that help them escape from life’s harsh realities. They do not cosplay to become the subject of desire, although life’s harsh reality takes a different perspective. Meanwhile, these cosplayers are some of the most dedicated and kindhearted people attending the convention. Taking their time to take pictures with children, families, and nerds that had to muster up enough courage to ask for a picture. Before passing judgment, remember the adage, never judge a comic book by its cover.

Cosplay has given nerds around the world an outlet and the courage to express themselves. Cosplaying is as much for the community as it is the cosplayer. You don’t have to spend paychecks on creating costumes, all you need is the desire to recreate your favorite character. Cosplay is an art, and every fan is an artist. Your masterpiece is a few thrift stores and hours of hard work away. The payoff will be priceless memories.