Dark Crystal: Age of Resistance The Essence of Revolt 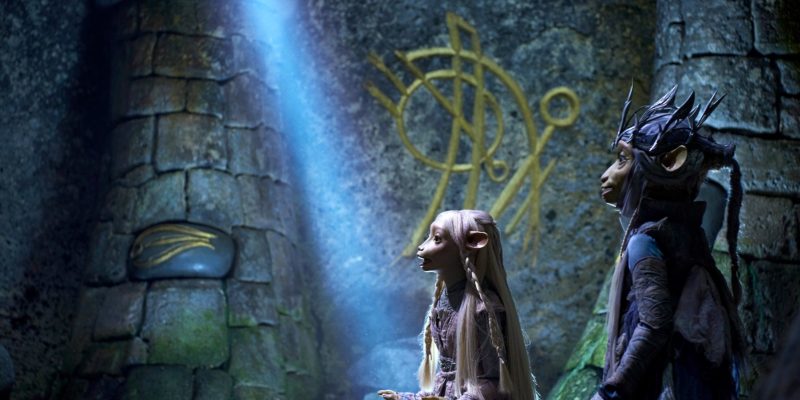 This show is visually stunning from the Dreamfast between Gelflings, to the Gelfling’s and other creatures, as well as the diverse landscapes of Thra. The captivating storytelling leads to enamoring characters eliciting empathy from the viewer for their plight.

The creatures of Thra have been subjected by the Skeksis’, and this series, if you have not seen the original film, gives fans hope the subjugated species would find a way to win. Those who have seen the 1982 masterpiece, still want to see the Skeksis pay for their crimes, even though they know the bad guys will win this revolutionary war.

There are three main Gelfling heroes in The Dark Crystal: Age of Resistance. Rian, a member of the Stonewood clan. This is the warrior clan of Thra. Rian’s father is the Captain, charged with protecting the Skeksis and the Dark Crystal. Rian is the first to witness the Skeksis’ atrocities. Rian saw the Skeksis’ steal the essence of Mira, his girlfriend.

After his escape, The Chamberlain of the Skeksis’ planted the seeds of lies that would convince Rian’s clan he not only killed Mira but carries a sickness that would spread if another Gelfing chose to Dreamfast with him. Dreamfasting is a moment of shared consciousness between Gelflings.

This plan would ensure the Gelfling would not discover the truth about the Skeksis’ draining the essence of the Gelfling’s. Rian eventually comes to bear the Dual Glaive, which contains the missing crystal shard from the Dark Crystal.

While Rian is unable to unite the Crystal and the shard, it was his bravery and Dreamfasting that would play a major role in uniting the Gelfling clans to finally revolt against their oppressors. Deet, and the rest of the Grottan tribe live underground in perfect harmony with their surroundings and fellow creatures.

Until the Darkening spreads, corrupting the Nurloc. A few of these infected creatures attack Deet, forcing her above ground. This is when she encounters the Sanctuary Tree. This sentient tree chooses who can hear them speak, so Deet was chosen for the quest to end the Darkening.

Unfortunately, this hopeful, joyous, and loving character will be transformed into the literal personification of the Darkening. The Emperor, the leader of the Skekzi’s, has channeled the Darkening through his staff, and uses it to attack the Gelfling rebellion. Deet, with the power of the Sanctuary Tree, absorbs all this energy and becomes infected.

Thus, at the end of Age of Resistance, she banishes herself for fear of the harm she could do all those she loves. Sacrifice for the greater good was a common theme throughout Dark Crystal: Age of Resistance. Bold Juergen, Rian’s friend, suffers the torture of having his essence drained as the Skeksis’ question him about his friend’s whereabouts, yet he does not yield.

Mother Aughra sacrifice her life to save the Vapra princesses and Maudra Fara, the leader of the Stonewood clan. Maudra Fara in turn sacrificed herself to save Seladon, so she could continue her quest for redemption. Princess Brea is royalty amongst the Vapra clan, represent the aristocracy. Thra is run by a Matriarchy, in every clan, a woman rules over the land.

Brea’s mother, their leader, the All Maudra, rules over all Gelfing tribes, as they do the bidding for the Skeksis’. Princess Brea has an insatiable thirst for knowledge, which leads her to question the Skekzi’s rule. In her quest for knowledge and to save Thra, she found a secret room with symbols of all seven tribes engraved in stone.

At first, she attempts to solve this puzzle by the order of the class system. Eventually she realizes class does not mean best, and all clans are equal. Once solving its mystery, she stumbles upon Lore, a rock “monster.” The Heretic, a shunned Skekzi, and his mystic were the ones to create Lore, the Protector, to escort her to the Circle of the Suns to meet Lore’s creators and find the key to defeating the Skekzi’s.

Lore saves Brea on a few occasions. One of which occurred after Seladon sold out her family to the Skeksis’, leading to their mother, the All Maudra’s death during the battle of the Gelfing’s and Skekzi’s. After she, and her essence, were saved by Mother Aughra, she joined the fight to restore the harmony in Thra.

Mother Aughra may not have been one of the main Gelfing’s but she is a hero throughout the adventure. Thra created Mother Aughra to communicate with the sentient beings to help create the Age of Harmony. After the urSkeks, the beings when Skeksis’ and Mystics combine, built Aughra an Observatory and Orrery in exchange for her knowledge of Thra.

While Aughra sent her consciousness into the stars, the Skeksis’ were created, ultimately leading to their proclamation of power and subsequent reign of terror. Mother Aughra took blame for the damage done to Thra. Just like most of the Gelfling’s ready to revolt, she would do everything in her power to help save Thra.

The Dark Crystal: Age of Resistance has as many engaging “secondary characters,’ as main characters. Deet’s escort, was a Podling with dreams of being a Paladin warrior. The Pod people domesticated the Fizzgig’s, another species of entertaining creatures.

The Chamberlain of the Skeksis was like the Littlefinger of Game of Thrones, always scheming and looking for an angle. The Heretic and his mystic counterpart, the Wanderer mystic, shined in spectacular fashion. This series was jampacked with heroes to cheer for, villains to root against, and “side” characters you want to see survive the impending war.

The Dark Crystal: Age of Resistance could be a surreal allegory to the oppression of the masses today. Just as geography, class systems, and propaganda create dissension amongst humanity so did the Skeksis utilize these tools to gain control and give them absolute power over the Gelflings and Thra itself.

The Dark Crystal symbolizes fossil fuels. As the Skeksis corrupted the Dark Crystal, Thra began to suffer. The Skeksis would stop at nothing for immortality, even if it meant the destruction of the planet itself. Just as the Corporatocracy will destroy every resource for the almighty dollar.

Unfortunately, the Gelfling’s may win the battle, but ultimately are doomed to lose the war. Much like in our profit driven world, the world continues to crumble under the hands of corruption, despite millions and millions looking through the crystal of truth. Hopefully, we won’t lose the essence of humanity