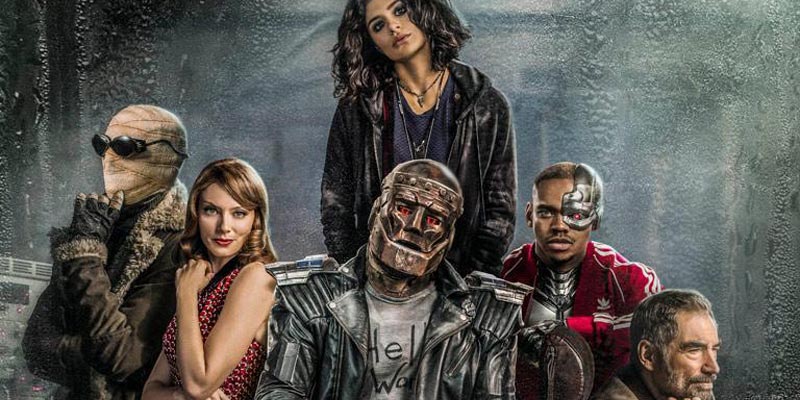 I once read an article about what some of the Marvel Cinematic Universe writers and producers would do with the DC Universe and one answer was start with B list heroes. Start with the heroes no one, outside of comic book fanboys, are too familiar with. Somebody at DC must have read the same article because that’s exactly what Dc did with Doom Patrol.

With the Doom Patrol, DC was able to do what they couldn’t do with Superman or Batman: they could re-invent history. You can’t make Superman come from anywhere but Krypton and be the ultimate hero. Batman has to lose his parents to violence to become the Dark Knight. The Doom Patrol, however, is another matter altogether. As long as you stick to some basics, the Doom Patrol can be molded into interesting TV.

The Doom Patrol was first seen in My Greatest Adventure #80 in 1963 created by writers Arnold Drake and Bob Haney and artist Bruno Premaini. The team was made up of a bunch of misfits: Niles Caulder, The Chief; Cliff Steel, Robotman; Larry Trainer, Negative Man; and Rita Farr, Elasti-Girl. Each one had a power that was more of a curse to them. They were hidden from society. They focused on the weird. That weird is the catalyst of the show.

Because to the general public, the Doom Patrol is virtually unknown, the showrunners are able to take liberties with the characters that you probably couldn’t do in 1963. Niles Caulder is the brains behind the team initially because he has saved all of their lives. His control issues over his patients in order to protect them means that he sometimes treats them like children and keeps them hidden within his mansion.

Cliff Steel is not only an adventurer and a race car driver but, in this adaption, he is not the nicest guy before his accident. He has multiple affairs on his wife and is relatively a big jerk. Larry Trainer is a pilot with a dark secret. His outward appearance as an all-American hero family man hides his secret homosexual romance with his fellow airman. Rita Farr was a world-famous beloved actress who was let her vanity control her.

Her vanity of being beautiful also extended to not wanting to be around anything or anybody who didn’t meet her standard of beauty. This is what makes Doom Patrol more unique than anything DC has put on a live action film. The flaws in these heroes are what makes this show cool. Not the powers or the special effects. The best part of Doom Patrol is the back story.

Later, in comic books, there have been other lineups of the Doom Patrol with Robotman being apart of all of them. In the Grant Morrison run of Doom Patrol, a character named Crazy Jane was introduced. Crazy Jane, Jane Morris, has 64 personalities with all different powers. As her character develops in comics, she also has a close relationship with Robotman. Crazy Jane is the unpredictable bad girl of the group.

Cyborg is another member of this team; however, real fanboys and fangirls know him as a member of the Teen Titans introduced in DC Comics Presents in 1980. DC has decided to make him a member of the Doom Patrol even though they do have a Titans series. The showrunners have kept his origin story pretty close to the original and have made him a known hero by the time he meets the Doom Patrol in the second episode.

The villain is Mr. Nobody. Mr. Nobody narrates the episodes and breaks the 4th wall in speech. Whoever thought of this idea is brilliant. This is another aspect of the show that makes it so weird and different in a good way. Mr. Nobody, Eric Morden, first appeared in Doom Patrol #86 in 1964. Depending on the writers this character has had various powers throughout the years and the TV series has given him powers that give the Doom Patrol a run for their money.

These characters are not just superbeings out to save the world because honestly being three episodes in they don’t want to save the world. They are reluctant heroes. A true band of misfits. Their mission is to find the Chief that Mr. Nobody has taken hostage. As they all struggle with their own personal demons and past, they join together to help their friend. This is not The Avenger or the Justice League; they are not coming in flashy and posing on a supped-up ride.

They are coming in gritty and dirty on an old short school bus. That’s what makes this different in a good way. Mr. Nobody telling all the origins of the team in the first episode then sucking everything, including the town, in a cosmic wormhole. By the second episode, we are introduced to Cyborg and find out that a donkey has swallowed the whole town. Like I said, weird but in a good way.

Doom Patrol is just what DC needed. This is not the A list superheroes and one of the benefits of that is that you can make changes to these characters that help this show. Changes that you couldn’t make to heroes like Batman, Superman and Wonder Woman. Yet they were able to take the weird that is in the comics books and relay it to the screen.

A new episode of Doom Patrol streams Friday at 9 am. Do yourself a favor and check it out.