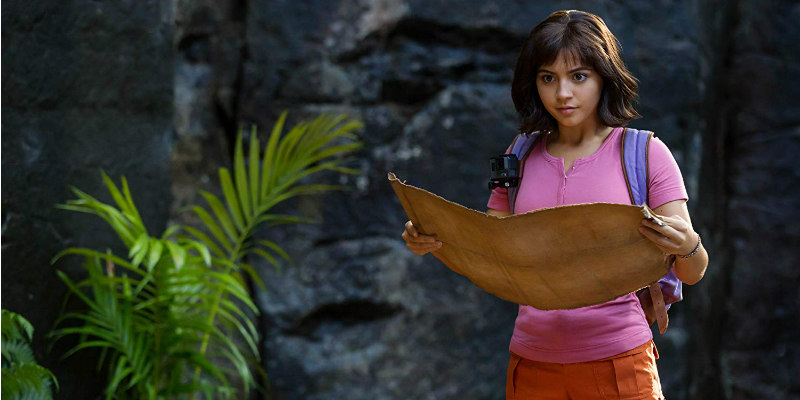 Dora and the Lost City of Gold was a very funny and entertaining family movie and you should definitely go see it whether you have kids or not. Now I could stop there and leave it to you to see this movie, but I want to backup my words here.

I’m not going to lie. When I heard of this movie coming out, I was not impressed and thought that this would be a joke. Then I saw the trailer. This looked like nothing but fun and adventure and I was right. Isabela Moner as teenage Dora was casting gold. She was Dora in every way.

Her perkiness and upbeat attitude in the face of adversity is exactly what you would expect from a live action Dora. She even had wide eyed blank stare like she was born for the role. This movie portrayed Dora grown in her teen years coping with learning how to live in the city away from the jungle and interacting with kids her own age instead of jungle animals.

Moving to the city, Dora is reunited with her cousin Diego, played by Jeff Wahlberg, who moved to the city 10 years earlier. Dora’s adjustment is hard and sometimes embarrassing for Diego in school. The characters naïve approach to the outside world is what keeps this movie close to its source material. It keeps the content pure. Moner is perfect in this capacity.

You can’t praise Moner’s Dora without giving recognition to the young version of Dora played by Madelyn Miranda. You would have thought they used this young actress as the prototype for the animation. The other main characters play well off Moner’s Dora. Fan favorite Michael Pena and Eva Longoria play Dora’s father and mother.

Of course, this is a much larger role than we are used to seeing Dora’s parents in the animated show. Pena adds his own style of quirky humor that he is known for that stands up in this feature. Dora’s new school friends Randy, played by Nicholas Coombe, and Sammy, played by Madeleine Madden, are along for the adventure with Dora’s cousin Diego, Wahlberg.

Coombe’s Randy is the nerdy kid in school that gets bullied and does not have a lot of friends while Madden’s Sammy is the bossy smart girl that no one can stand. Yes, all characters we have seen before which is normally hackneyed and annoying but these two are a lot more likeable then your run of the mill. Wahlberg’s Diego is a character that is not like the animated.

This Diego is 10 years older and grew up in the big city. He’s different now. Diego shows a contrast of what Dora would have been like if she had grown up in the city. Diego had to lose some of the childhood innocence to survive. Never fear though, Diego comes around to back his cousins play when it is most needed.

Eugenio Derbez played Alejandro Gutierrez who joins Dora’s adventure under a ruse that he is a friend of her parents when he is actually the lead villain. You kind of see this coming as an adult watching this movie but you really didn’t come to a Dora Explorer movie looking for an intricate plot. Derbez does an excellent job of providing a threat for our heroes but not too threatening as to scare the young audience.

Another character worth mentioning is Boots, Dora’s best friend and monkey. Boots was a CGI creation that added so much to this movie. Boots was voiced by Danny Trejo and this was not only a scene stealer but the funniest moment in the film. One of the best parts of this movie was the tongue in cheek humor. The script and the actors played up to the nuances of the animations.

Dora breaking the fourth wall to talk to her audience, Dora pulling random things out of her backpack and even Dora putting actual red boot on her friend monkey, Boots were all nods to the animation. There were a few scenes where Moner’s Dora would give that wide eyed blank stare and the scene was set up for specific reactions from other characters as if to say this is what would happen in the real world if a girl looks at you the way Dora does throughout her whole episode. And the reactions were hilarious.

If I had one complaint about this movie it would have to be Swiper the Fox. Yes, he is a big part of the Dora universe but had a CGI fox with a mask running around for some added comic relief. Swiper the Fox was in an imaginary sequence in the beginning of the movie when Dora and Diego were kids and you assumed that was all you were getting for nostalgia sake.

However, Swiper was made real as he was part of the bandit of bad guys after Dora whose main job was, you guessed it, to swipe the map. I know this was based on a kid cartoon and not to be taken serious with a bit of the unbelievable but having a talking fox walking around on his hind legs wearing a mask and acting human was a bit much. Funny but much.

As this is the tail end of 2019, I would put Dora and the Lost City of Gold as one of the best movies I have seen this year. So far. Dora did not need a map to find a fan in me. I am eagerly awaiting a follow up and will have to add this to my dvd collection.