Fear of a Black Superman 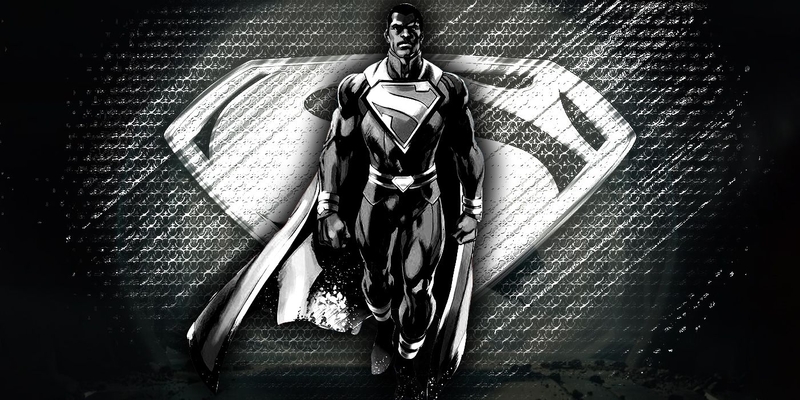 When the news hit that Warner Bros was going to do a Black Superman, social media went crazy. With a whole bunch of speculation going around, there were numerous comments strongly in disagreement of making Clark Kent a Black man.

These are probably the same people who were not comic book educated to know that Marvel’s Black Panther movie was not about the party movement of the 60’s and early 70’s but an actual legit tights wearing hero that had been around since 1966 and created by two of the most famous creators Stan Lee and Jack Kirby who happen to be White.

With the current climate of the United States today, racism is not something new. The comic book world imitates life often. When Barack Obama became President of the United States there was a faction of people that did not accept him in his office based on the color of his skin. The best way art imitated life is when Sam Wilson/Falcon became Captain America. In the comics, they showed people not accepting this because Sam Wilson was Black.

The backlash the fans are having with the idea that there could be a Black Superman stems from the overt racism established in this country in recent years. With the sentiment of “how dare DC try to push a Black Superman on us”, the “fan” shows they have no true knowledge of the Superman character and that they are in fact racist.

Keep in mind that the possibility of a Black Superman comes on the heels of the recent accusations of racism on the set of 2017’s Justice League movie. Ray Fisher who portrayed Cyborg in that movie claimed how he was treated unfairly by Josh Whedon on the set of that movie. This story became even more believable once the Snyder cut of that movie was released and we saw how much Ray Fisher’s Cyborg was cut from the movie.

Makes you wonder if Warner Bros. is just doing this to not seem racist.

Amid the reports of DC Extended Universe suddenly becoming “woke”, the fans have begun to faction off into groups. Groups who oppose the possibility of a Black Superman, groups all for this new take on an old character, and groups who have lost interest in DC movies to even care. Before you pick a group, however, let us hear at ObsidianNomad shed some light on the situation.

First thing is that there have been at least three Black versions of Superman for a few years now and neither is named Clark Kent. You must first understand that DC has a multiverse. They are actually kind of reckless with this multiverse. The multiverse is a way DC can tell stories putting known heroes in different situations or make changes to these heroes and say that it is another Earth in a different universe. Sometimes it is cool and most of the time it is cheap and cheesy.

The two known Black Supermen exist in this multiverse. That is if one of those is in consideration of being used, but we will get to that.

The first such Superman only made one appearance. Legends of the DC Universe: Crisis on Infinite Earths (February 1999), told a one-shot pre-Crisis story of Earth D. Earth D was just like the Earth we knew however their heroes were more ethnically diverse. Yeah, they did that. Little is known about this Superman because he was killed in the same comic issue that he debuted. It is unclear whether his name is Clark Kent.

The second Superman is Calvin Ellis, Kalel, of Earth 23. Calvin Ellis Superman made his first appearance in Final Crisis #7 in March 2009. This version of Superman was modeled after former President Barack Obama so besides being Superman, Calvin Ellis was also President of the United States. Yes, they did that too. In typical fashion, being a Black hero when this Kryptonian came to Earth he was adopted by a poor family. However, as you see his name was not Clark Kent.

The third Superman is Val-Zod who hails from Earth 2. Val-Zod was kept in hiding when he crashed to Earth so there was no need for a secret identity. On top of that, Earth 2 had a Clark Kent/Superman who was previously killed in action. Val-Zod was another Kryptonian that landed on Earth that no one knew about.

As we all know, DC does not handle its properties well when it comes to presenting them in live-action on the silver screen. I personally would like to see Henry Cavil continue as Superman and would be even more thrilled for Warner Bros. to continue the Snyder version of the DCEU. There are viable options here that can be used instead of doing the condescending and lazy thing of making Clark Kent a Black man. Changing Clark Kent into a Black man is something that does not have to happen.

Leave a comment to let us know your position in this debate. And when you come across someone who is against a Black Superman based on racism, please show them this article, and help educate them.

2021-05-12
Previous Post: 7 Sci-Fi Universes That We Would Love to Live In
Next Post: Top 8 Parodies in Science Fiction