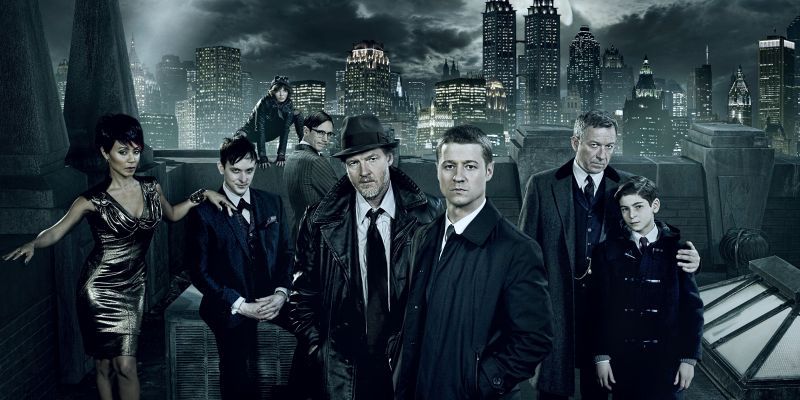 When Gotham first came on FOX TV 5 years ago I was excited. I’m a big Batman fan. Even though this was not specifically supposed to be about Batman I was still excited. See, I was lead to believe that this was about Gotham before Batman based around James Gordon and the Gotham City Police Department (GCPD). In part it was but that wasn’t all of it.

The series started with the infamous death of Thomas and Martha Wayne, the parent of Bruce Wayne who would one day become Batman. With the new lore that was partly created in Christopher Nolan’s Batman movie trilogy, Jim Gordon was there to comfort a young newly orphaned Bruce Wayne and a friendship of respect grew from there. The show Gotham took that concept a step further and explored that friendship.

I love the whole Batman lore. Batman is my favorite character. I did not, however, expect any of this show to be about Batman because it was my understanding that this show was about Gotham before Batman. I was ok with that. Being into the Batman lore I knew the importance of James Gordon and was very curious about the back story the television show would give him. In that respect, I was not disappointed.

Ben McKenzie’s Jim Gordon was what this show needed. It showed him coming in as a detective and making his way up to the commissioner. It showed a man with a history before Gotham that garnered his tough as nails persona. This was not your campy 60’s TV Commissioner Gordon who was the bumbling guy waiting on a masked man’s word before he tried to solve his own crime. This was the story of the hero Gotham had before there was ever a Batman. This was the average detective dedicated to his job with just the law and his gun taking on gangs, criminals, murderers, psychopaths, and assassins. No Cape, no mask, no gadgets or fancy cars.

Like Batman, Jim Gordon did have a partner, Harvey Bullock, played masterfully by Donal Logue. Harvey Bullock was teamed up with Jim Gordon in the first episode and started off as this cynical washed-up detective that had given up on Gotham. He was not the best partner for a man like Gordon who wanted to clean up corruption. Gordon wanted to make waves and Bullock was not about that life. Over the five year span of the show, Gordon’s influence changed Bullock and showed him the cop he needed to be. Those of us familiar with Batman lore knew what this outcome would be but watching the transition was still enjoyable television.

James Gordon and the GCPD was the main focus of the show and had they kept it at that I would have liked it much better. I had two problems with the show: villains and Bruce Wayne. Let’s talk about the later first. Starting the show with the death of the Wayne’s and showing a young emotional Bruce Wayne was awesome. Even going back to this character now and again would have been great. David Mazouz as a young traumatized Bruce Wayne was perfect. My problem was his journey. We all know his story and how he was grief-stricken and pledged to avenge his parent’s death. When they relayed this on the TV show, I did not expect this training to be right away. They immediately started turning this kid into his future hero.

I wanted to see him grow, not just into his future hero but as a boy coping with the death of his parents. This show started running with the “one day he’ll be Batman” inception from the beginning. Throughout the five year run, there were times when this show focused too much on Bruce Wayne becoming Batman instead of Gotham before Batman. Let’s talk about villains, my second problem with this show. The first season you were introduced to a young girl Selina Kyle, who would become Catwoman, and young man named Oswald Cobblepot who would one day be known as the Penguin starting in the low ranks of the criminal underworld and a young police scientist named Edward E Nigma who would one day become the future criminal mastermind called the Riddler.

Camren Bicondova, Robin Lord Taylor and Cory Michael were outstanding in these roles. The problem was that by the show’s second season they were already in their perspective future identities. This happened way too fast and years before there was ever a Batman. Cobblepot went from not liking the name Penguin to embracing it with a criminal dynasty. Nigma went from a nerdy socially awkward police scientist to a murdering criminal mastermind. Selina Kyle went from child street urchin to teenager walking the fence of the law carrying a whip. And just like that other Batman villains were brought on with origin stories before there was even a Batman. Poison Ivy, Professor Pig, Solomon Grundy, Victor Zsasz, Ra’s al Ghul, Bane, and even the Joker.

Gotham quickly became what Batman villain can we show without Batman. The final story arch used for the final season was based on the No Man’s Land storyline from the comic books. Even with this, now you are telling a classic Batman storyline without Batman. Jim Gordon again became the main hero with a young Bruce Wayne walking about the show as if he were already Batman without the mask spoiling his whole playboy façade. This rich kid is allowed to assist the police wearing all black with excellent combat skills to help save Gotham that everyone is supposed to forget 10 years later? Please.

Gotham was a good show that had the potential to be better if the showrunners had focused on Gotham, Jim Gordon and the GCPD and not making a Batman begins show. Instead, they focused on Bruce Wayne’s journey prematurely and creating a who’s who of Batman villains without the existence of there being a Batman. I would have loved to see an original storyline about Gotham City.