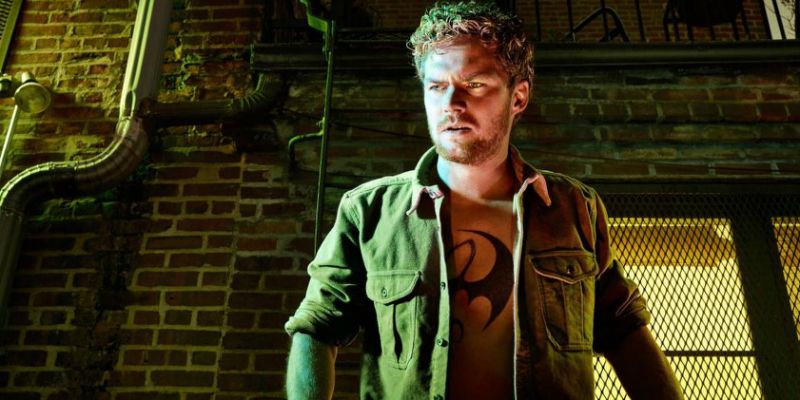 So, let’s start this review off on a positive note: Iron Fist season 2 is way better than Iron Fist season 1. Ok, so I realize that’s not saying much because season 1 really sucked. I don’t even think I made it to the end and if I did I just don’t remember it. To make matters worse, Danny Rand was in Netflix Defenders and the character still annoyed the hell out of everyone. Finn Jones’ Danny Rand/Iron Fist was not making any fast fans and it wasn’t looking good. The character was being portrayed as extremely naïve and unsure of himself.

This was not the confident and wise Danny Rand fanboys were used to reading about. On top of that, the fight scenes were just mediocre which is not what was expected of the Iron Fist. We were starting to lose faith in the mighty Marvel casting machine that had done such an awesome job of casting the right actors for all the MCU and Netflix shows. You were starting to think how could the same machine that cast Robert Downey Jr as Tony Stark and Chris Evans as Captain America make a mistake like this. How could that same machine that cast Jon Bernthal as the perfect Punisher and Mike Colter as the perfect Luke Cage miss the mark on casting Iron Fist?

At this point, after watching season 1 and Defenders, you start to think maybe I’ll pass on iron Fist season 2. Then Finn Jones shows up as Danny Rand in Luke Cage season 2. Now we were starting to see what maybe the casting director saw. We got a brief taste of a more confident Danny Rand. This was a Danny Rand who had more of a handle in this world and was able to give his friend Luke sound advice. Ok so now maybe season 2 won’t be that much of a waste. On Friday, September 7, Netflix aired season 2 of Iron Fist.

Danny feels it is his duty to intervene before innocent people get hurt. Meanwhile, Joy Meachum is back in town and she is out for vengeance against Danny and her bother Ward. Joy’s plan includes Davos, who is Danny’s “brother” and mortal enemy and a mercenary named Mary Walker who in comics is known as Typhoid Mary. We also pick up Ward at meetings for his addictions while having an affair with his counselor. But let’s talk about the true star of Iron Fist season 2: Colleen Wing. Jessica Henwick’s Colleen Wing was a stand out in season 1. One of the few things that was right about season 1. You had an actress that was perfect for the part and happen to have chemistry with Finn Jones’ Danny Rand no matter how lame he was.

Then the character shows up in Defenders and pulls her weight enough that she should have been pictured with the other four main cast members. Colleen then shows up in Luke Cage helping Misty Knight cope with the loss of her arm and helps her get her mojo back with one of the best bar fights I have ever seen. Before we go any further, I’m going to go on record as saying I love Jessica Henwick as Colleen Wing and I am a huge fan. Just as season 1 was about Danny finding himself and his place in his new life, season 2 was about Colleen finding herself. After the events of season 1 and Defenders, we find Colleen volunteering at the local community center. In this community center, she finds an item that was donated that had her family’s crest on it.

While investigating where this artifact came from, Colleen becomes involved with the same gang war that Danny is trying to prevent. Their missions become one and this is no longer just about Danny Rand as the Iron Fist but about Colleen Wing his partner in fight, life, and love. Maybe this is what was needed in season 1. The extra bonus of getting more Colleen also comes with getting more of her friend Misty Knight. I’m sure I wasn’t the only fanboy salivating over a live action team of Daughters of the Dragon. Those who don’t know need to pick up a few old Heroes for Hire books or just google that. Colleen Wing and Misty Knight teaming up throughout season 2 was magic.

The chemistry between the Jessica Henwick and Simone Missick hit the mark perfectly. It was not forced and it made sense. In true Marvel Netflix fashion, the villains were not cut and dry. There’s always a twist in what to expect from villains in these Netflix shows. Joy Meachum and Davos’ partnership take some interesting turns as does Joy’s employment of Mary Walker. Alice Eve’s handling of Mary’s multiple personalities was masterful. You may actually think that two different look-alike actresses are pulling this off. The unpredictable psychotic was the proverbial fly in the ointment. Joy Meachum goes on a road of revenge and redemption.

Davos has one mission in mind that doesn’t quite fit into what Joy intended and it’s all centered around the Iron Fist. We get a lot of flashbacks from Danny and Davos’ childhood so you can understand his motivation for his actions. The cold ruthlessness that Davos displayed through the series made him a villain to be reckoned with. The ultimate threat was real and that’s exactly what this series needed. As much as this was a much better season than the first, not everything was good. First of all, as a Netflix subscriber, you may feel cheated as this was not a 13-episode series. You got only 10 episodes.

You had some plot points that were not totally followed through. Joy Meachum’s total revenge plan was not brought to a close and forgotten about. For a series to be about Danny Rand/Iron Fist he spent a lot of time hurt or getting his ass handed to him. Also, for a series to be about Danny Rand/Iron Fist, Finn Jones still had a weak fighting style on camera totally being showed up my Jessica Henwick’s Colleen Wing. I did spend the whole season waiting for Luke Cage to appear looking for another team up but was disappointed. Overall, Iron Fist season 2 is worth the watch. There’s some twist and turns that will surprise you and the things that you have to look over to enjoy are quite minor.

Let us know what you think of Iron Fist season 2 and our review. We would love to hear from you.

2018-09-19
Previous Post: Uncle Ben Is Still Dead – And So Are Thomas and Martha Wayne
Next Post: The Joker – The History & The Men Who Laugh