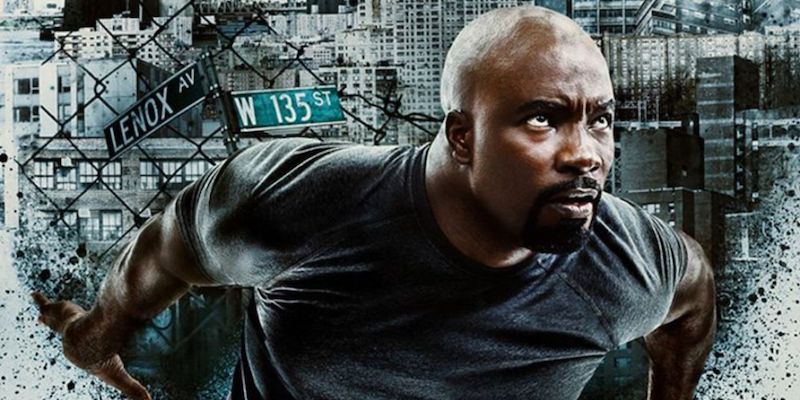 When I read or hear a review of a movie or show, I usually take it with a grain of salt and if I want to see it I will form my own opinion. This review is a week and a half after the show originally aired for a reason. We want you to form your own opinion. I have heard mixed opinions, but I honestly don’t think any of them will be echoed in this review.

Luke Cage season 2 picks up after the events in last years Defenders. Luke Cage is the man of Harlem. After defeating Diamondback, getting exonerated from prison and helping the Defenders save New York, Luke is enjoying celebrity as the hero of Harlem. Clair is still there as his right–hand woman. Misty Knight is a police hero struggling with the loss of her right arm from the events in Defenders. Mariah and Shades are trying to get a big score so they can go legit with the help of Piranha Jones giving them inside trade information. The new big bad Bushmaster comes to New York to claim his birthright and to get revenge on a wrong done by Mariah’s family, The Stokes.

Even though this is called Luke Cage and about Luke Cage, some of the standouts of this season were not Luke Cage. Don’t get me wrong, Mike Colter’s Luke Cage is more on point than ever. Colter plays this role as if he was born for it and makes the character come to life. Luke is trying to establish his place in Harlem as it’s hero. He is a man tired of what Harlem has become. Luke is dealing with a gang war along with the reappearance of his father, who wants to reconnect their relationship. We also get a Powerman and Iron Fist team up that is probably the best showing of Finn’s Danny Rand on Netflix to date. All the time I’m watching this, I find myself saying is this something the Luke Cage in the comic would say or do? And I often find myself answering myself with a “damn right, he would”.

However, two other notable standouts were Misty Knight and Mariah Dillard. It’s not a mystery that Misty gets her well awaited bionic arm just like the comic version, but what we see here that is written so well is her journey in getting that arm. It’s not just getting the arm but her life after the arm. We watch her deal with being on the force without an arm and her fight to still stay relevant as an officer of the law. Learning that with or without an arm she is still a force to be reckoned with and proving that not only to herself but to the world. During this journey, fanboys and girls are treated to a few awesome scenes with Misty and Colleen Wing which are a big payoff. Emmy award-winning actress Alfre Woodard literally stole the show and goes down in my book as one of the classic on-screen comic book villains.

Woodard commanded her scenes and played Mariah unpredictably. Mariah had a sense of loyalty until it suited her to no longer abide by that loyalty. Mariah hid her unstable psyche, trying to constantly prove she was better than a ghost, from those around her. Her unusual relationship with Shades threw a lot of people, including myself, off. But as uncomfortable as it was to sometimes watch, there was a valid reason for this relationship that played a part until the last episode of the series. Woodard was masterful in playing a political leader of the community to the hardened head of a crime organization then shifting to a woman trying to make amends to her long-lost daughter and bringing her into all aspects of her life.

Another important development was from a surprise breakout character, D.W. Griffith. D.W started off the series as a comic relief that was all about the propaganda and profit of being on the inside with Luke Cage. His involvement was borderline selfish. Then he changed as the show progressed. D.W. became a conscience for Luke. D.W. became the everyman on the street that was able to agree or disagree with Cage and have a voice in his life. D.W.’s involvement became less comic relief and more like someone we should listen to on a more serious tip.

I’m not going to totally sugar coat season two, it’s not all rave reviews with me. Luke Cage starts off strong and ends even stronger, however, there is a lull in the middle. The series drags a little more than usual in the middle of the 13 episodes which takes the show offbeat. This could be because of the different directors in so many episodes. You had 13 directors with an episode each. The first episode being directed by famed actress Lucy Liu. This could cause some to lose interest but trust me and stay with it because the payoff is well worth the wait. There is also a romance that is uncomfortable to watch at times because it is not fully explored or understood. But, again, this is something that pays off in the end. At times the writing was a bit lackluster, with forced lines to seem current and one-liners past corny. Some storytelling beats did not line up. You had characters leave to never return for reasons that at least should have had them do a walk-on in the last episodes. On the other hand, you had characters vanish with no reason at all. In both cases, you find yourself looking at scenes saying why is this character not back in the fold; it makes no sense.

Even with the slow middle, the soundtrack in Luke Cage cannot be denied. With music from artist like Ghost Face Killer, Jadakiss, Faith Evans, Rakim, KRS One, and Stephen Marley among others, the soundtrack to season two was fire. Just as the soundtrack was put together in season one, the same was done in season two to help move and compliment the story. The brilliance is the way the club Harlem Paradise is used as a vehicle to showcase the artist and music yet move the story.

Overall, this is a must watch show. I highly recommend Luke Cage because it gives me hope for the next Iron Fist showing and newer hopes for more Colleen Wing and Misty Knight team-ups. I am eagerly awaiting Luke Cage season 3 because I need to witness the next evolution of Luke Cage, Misty Knight, and even D.W. Griffith.

Every show is going to have its faults. No one is going to like everything about every show no matter how much it’s hyped up. Despite that fact, Luke Cage season 2 deserves your attention. You tell us what you think of our review in the comments below.

2018-07-04
Previous Post: Do You Have A Moment To Discuss… Gentrification?
Next Post: Why We Remember Steve Ditko