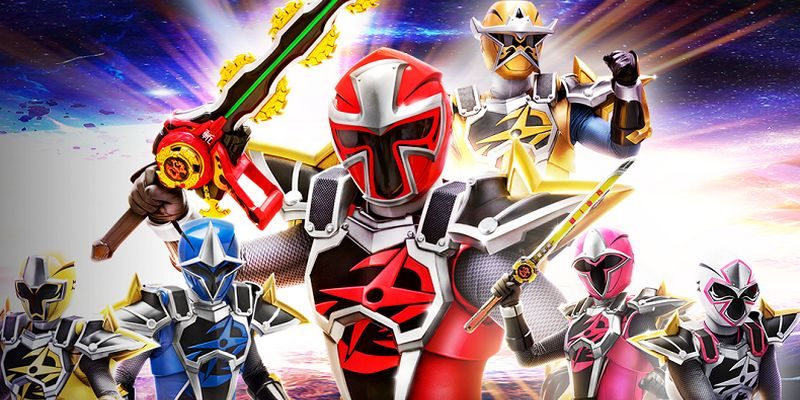 I remember watching the Power Rangers in the 1990’s with my son and having all the action figures. This time I watched the 25th Anniversary special with my 14-year-old daughter. The concept of Power Rangers really hasn’t changed in 25 years. Where my son was a toddler and played with the action figures when the idea was new, it was something wondrous. Never before watching an episode of any Power Rangers, my daughter thought it was cheesy. Thank God for cheesy. The current Rangers squad is called Power Rangers Ninja Steel. Just as any other Anniversary episode the tradition is to bring in older Rangers. Who better to start this episode with than Tommy Oliver?

Now if you don’t know that character then you simply are not a Power Rangers fan. Tommy Oliver has been about 5 or 6 different Rangers and is probably in the most Power Ranger episodes than any other character. On a side note, Jason David Frank who plays the character is probably the most popular Ranger and is a hit at the comic cons and Ranger cons. I met this man personally one time at a con and when I tell you he is the real deal believe it. This has got to be the most people-oriented nicest celebrity I have ever met. When Tommy was last a Ranger and was the Black Dino Ranger, he was a professor. Now we catch up with Tommy and he apparently is married with a son with wife and son being unseen. Tommy gets captured by an unknown assailant.

Cut to Ninja Steel Rangers being called to base for an emergency. Time Force Ranger Red, Wes, Dino Charge Ranger Blue, Kuda, and RPM Silver, Gemma appear to tell the Ninja Steel Rangers of a danger to all the Power Rangers. Rangers are being kidnapped and need to be found. Wes says that they need to find Tommy to help solve this dilemma. What’s cool about this scene is that Wes reveals that there are different dimensions in which Power Rangers exist. Interesting. This means all those seasons you wondered why there were no crossovers as other seasons it’s probably because there are different dimensions. This would also explain different time periods and different villains. Because, really, there’s no way one planet would constantly get alien invaders every year.

In the first 10 minutes, you have two big major reveals and I am stoked for the rest of the episode. All the Rangers go to find Tommy to find that he is under control of the bad villain, Drayvon, who has captured various Rangers in order to create an evil Ranger clone army. His plan is to breach the dimensions and control all the other Power Ranger universes. It’s revealed that this Tommy is a robot and the real Tommy is with the other captured Rangers being duplicated. Our Tommy escapes and saves the new assortment of Rangers surrounded by Drayvon’s men. They all go to rescue the other captured Rangers. Another big reveal here.

As they rescue the Rangers, Tommy is confronted by his evil robot twin and faces off. The evil twin takes on the form of Black Dino Ranger and Tommy reveals he has a Master Morpher and fights as Red Zeo then White Ranger and then the original Green Ranger. This was classic and well worth it. The rest is pretty basic and predictable. In a good way. All the Rangers team up and we get the signature pose with all the Rangers morphing and the big fire explosion behind them. I’ve been watching these team-ups for years and apparently whenever you have more than 10 Rangers you’re going to have a big fireball explosion when they morph.

When Drayvon is defeated he turns big which would normally mean the Rangers would get there zoids and form a zoid big enough to fight the villain. This was slightly different as Tommy was set to deal the final blow in White Ranger form with his Falconzoid. After congratulating each other with a forever Rangers cheer all Rangers go through portals to their own dimensions with Ninja Steel Red Brody going last stating “Now that was epic”. When I first saw that this show was only a half hour, I was worried how good it could be for a 25th anniversary to only fit it into 30 minutes.

I underestimated the whole thing. Yeah, they probably could have made this an hour and drew it our longer but you really didn’t need to do that. The one main problem I have with this is that it opened some new facets of Power Rangers that I fear will not be explored any further. I want to know more about these different dimensions and this device Wes has to breach them all. I want to learn more about Tommy Oliver’s family life and how he got a Master Morpher. Don’t tease me and walk away. Cheesy. Yes. But that’s what the Power Rangers is and that’s a good thing.

2018-08-29
Previous Post: Hulu’s Runaways: A Review in Pride
Next Post: Uncle Ben Is Still Dead – And So Are Thomas and Martha Wayne