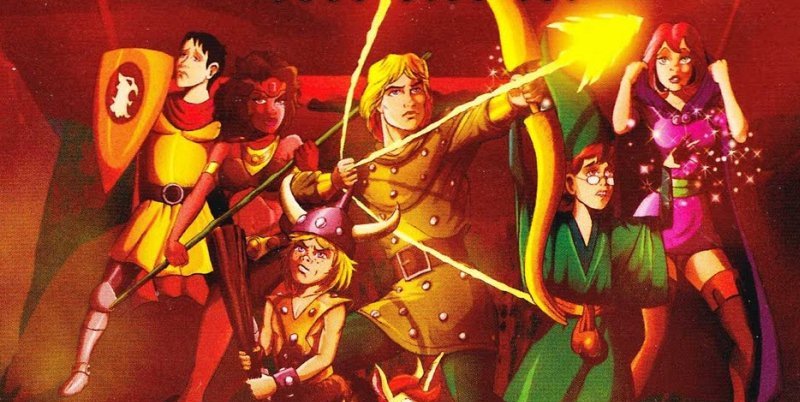 I think most of us can agree that Saturday mornings for us old heads were magical. The major networks, ABC, NBC, and CBS had a whole line up of cartoons and kid shows every Saturday morning. Anything from live-action monsters and puppet monsters to cartoon looney animals and cavemen. Like I said, it was magical.

One of the Saturday morning cartoons I loved the most was Dungeons and Dragons. Running on CBS from 1983 to 1985, Dungeons and Dragons was about a group of teenagers transported to a magical realm and given magical weapons to help them on the search for the way home. While on their search they are guided by the mysterious Dungeon Master.

About 9 years prior to this cartoon hitting the Saturday morning lineup, two guys named Gary Gygax and Dave Arneson came up with this awesome fantasy role-playing game called Dungeons and Dragons. A game so popular it inspired the cartoon, a movie, and is still played by millions today. Dungeons and Dragons, or D&D as it is called, has come a long way since its beginning in 1974.

The one main similarity between the actual game and the cartoon is the Dungeon Master. In the game, the Dungeon Master is the control of the realm. Like a know-all and see all God that makes the rules and guides the players in their characters. In the animated series, it’s sort of the same thing. When these kids are transported to the realm, they are given names and weapons of power and are guided through the land by the Dungeon Master.

The Dungeon Master is a cool character in the animated series. He knows all the answers and is very mysterious. He guides the kids through the realm and gives them hints to figure out their next mission on the quest to find a way home. With each mission, the kids learn a valuable life lesson.

That was one of the things that stood out about this animated series: Dungeons and Dragons taught lessons. Besides being an action fantasy cartoon, kids learned valuable lessons about life. Not the typical “share” or “be nice to your neighbor” run of the mill stuff. Watching Dungeons and Dragons a kid could learn about courage, inner strength, sacrifice, and loyalty. Real-life lessons.

In the original role-playing game, you did just that: you role-played. You can create your own character to go through the adventures and be whatever you want. To fulfill that part in the series, there are the 5 kids that have been transported to the realm: Hank the Ranger, Eric the Cavalier, Diana the Acrobat, Presto the Magician, Sheila the Thief, and Bobby the Barbarian. In the realm they make friends with a young unicorn they named Uni.

The fivesome is rounded out with the two siblings of the group. Sheila, voiced by Katie Leigh, is given a cloak of invisibility. Bobby, voiced by Ted Field III, is given a magical club that is strong enough to cause earthquakes or destroy almost anything in his way.

These five kids journeyed through the realm and learned valuable life lessons to relay to their Saturday morning audience. Each week they were on a mission to find their way home and each week they would learn a valuable lesson. However, they would never make it home and the show was canceled in 1985.

I should also mention the villain of this series. Venger, voiced by Peter Cullen, was the main villain every week who was after the teen’s weapons so he could use them to make him more powerful. He rode a flying horse called Night-Mare and had a shadowy henchman that would sometimes appear name Shadow Demon. The only being that would give him pause was his arch-rival for evil in the realm, Tiamat, voiced by Frank Welken, which was a five-headed dragon.

In May 2019, the characters were brought to live-action for a Brazilian car commercial. Shot in Argentina the commercial was made to promote the launch of Renault’s Kwid Outsider. The commercial was spot on and I’m sure fans would have loved to see more. It should have been the Dungeons and Dragons movie we deserved instead of the one we got in 2000. That was a mess.

There was an unfinished episode called Requiem that was to be the last episode. Because of the cancelation of the show, this episode was not finished. In September 2020, a fan-made completion of Requiem was made wrapping up the story of the teens sending them all home. Presto decided to stay behind in this adaption to learn more magic.

Dungeons and Dragons was one of my favorite parts of Saturday morning cartoons. Every week we waited to see if the kids ever made it back home. Every week we watched how they got better at using their weapons. Like I said, they never make it home in the original series but watching them try is well worth it.

In the comments tell us what you thought of the Dungeons and Dragons animated series. If you didn’t like that one, then tell us what was your favorite Saturday morning cartoon.