The Tomorrow War: The Review 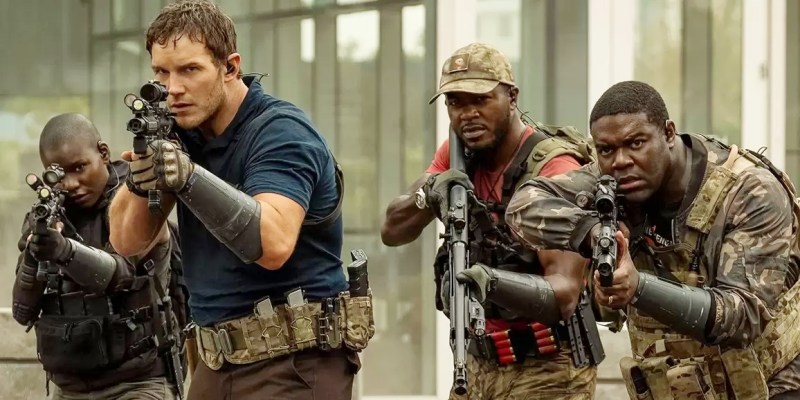 Imagine knowing your future? How about knowing when you will die? That is the premise for the new Amazon movie released last Friday, July 2nd.

But a twist here is that they seem to pick people who are not alive in thirty years. Which I guess solves the question of creating a paradox of existing at two places at one time.

Another twist is that when you go to the future to fight in the army, you only go for seven days before you are beamed back to your own time.

Time travel as a plot device is never easy or clean.

Our story centers on Dan Forester (Chris Pratt), who is a biology teacher and ex-green beret. Dan is drafted into the war and sent to the future. However, something goes wrong with the time equipment and no one else can go through it. Dan and his team are ordered to rescue a team of scientists and the virus they had been working on to save the world. Finding the scientist killed by the aliens (Whitespikes) they are ordered to bring back the test viruses.

Dan is then taken to the colonel in charge to find out that it is his daughter Muri (Yvonne Strahovski) all grown up. Together they develop a virus that will kill the alien and Dan is expected to take this virus back to his original time to use it to kill the aliens before they start their invasion.

Essentially, that is the plot.

Like I said, it is a time travel story with more than a few holes.

Chris Pratt does a good job as Dan Forester but for the sake of the story, he is put in situations because of who he is. His reactions are first of wonderment then he takes it all in stride when thrown in the heat of battle as a typical everyday thing. Dude, you are in the future be amazed. When he gets to the future and finds out his future is not so bright and he watches his daughter die, that becomes his reasoning for stopping this war before it begins. If he stops this war from ever happening then the death, he watches his daughter die never happens. But I am going to get back to that.

Back in his regular time, Dan enlists the aid of his father James (J.K. Simmons), who is a Vietnam vet and an anti-government survivalist, along with two soldiers he went into the future with (Sam Richardson and Edwin Hodge) to find these aliens in the present time and destroy them so the war never happens.

Although I liked this movie, my problem with it was predictability. His draftee friend Charlie having a Ph.D. in Earth and Atmospheric Science and his student played by Seth Scenall, all had a purpose you can see coming a mile away. You can tell there was a reason for each character to be there. It was too nice of a complete package.

This is a fun movie to watch as long as you do not think about the questions it poses. But that is the price for movies based on time travel. Every writer has different views on how this works. Check this out on Amazon Prime yourself and let us know what you think in the comments.