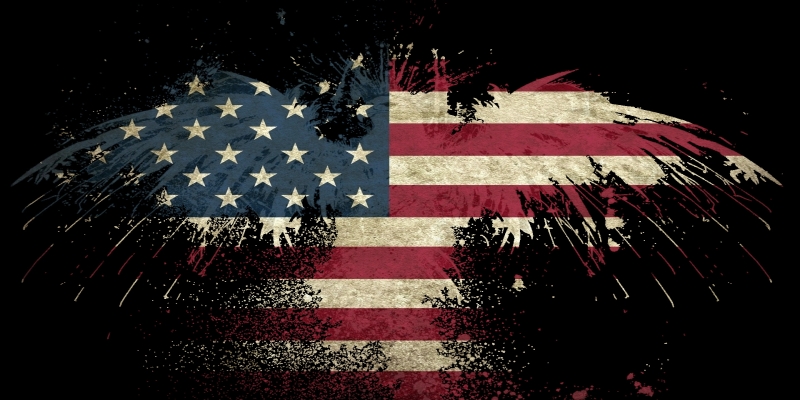 In celebration of Independence Day, Obsidian Nomad presents our top 10 patriotic superheroes. These are the heroes that best represent America. A lot of the common denominators in these heroes are relationships to World War II and some kind of fluke accident or secret serum. Nevertheless, these are the heroes we most think of when we think of America.

Check out our list and let us know who you would add or take away.

Courtney Whitmore is the stepdaughter of the Pat Dugan original sidekick hero of the Star-Spangled Kid, Stripesy. Courtney found the Kid’s old cosmic belt in the garage and originally calls herself the Star-Spangled Kid to annoy her stepfather. Later, as a member of the JSA, she meets the original Starman and receives his cosmic rod and changes her name to Star Girl.

Lemar Hoskins was given a version of the super soldier formula and was selected by the government to be a Bucky for the new Captain America when Steve Rogers had quit. He changed his name to Battlestar after another Black man reminded him that calling himself Bucky was derogatory because that was a term for slaves.

John Walker was given a version of the super soldier formula and originally became the Super Patriot as a nemesis to Captain America. When Steve Rogers was no longer Captain America, the government picked Walker to be the replacement. When Rogers resumes the mantle of Captain America, Walker becomes the US Agent.

Sylvester Pemberton was a kid superhero during World War II with an adult sidekick, Stripesy. Both heroes were lost in time with the rest of the superhero group, Seven Soldiers of Victory, and rescued in modern day by the Justice League and the Justice Society. In modern time and still young, Sylvester joined the Justice Society and used the then injured Starman’s cosmic rod. He remodeled it into a belt and changed his name to Skyman.

Eli Brandley is the grandson of the African American Captain America, Isaiah Bradley. Isaiah was part of an experiment the government had after the super soldier serum was lost after it turned Steve Rogers into the first Captain America. Eli, wanted to follow in his grandfathers’ footsteps, convinced the other heroes that he had powers by using an illegal drug to augment himself. When he was injured in a battle trying to save Captain America, he was given a blood transfusion by his grandfather which gave him real powers to fight as Patriot.

Madeline Joyce was an heiress who tampered with a machine a scientist had created that he claimed gave him superpowers. While tampering with the machine it was hit with lightning and she gained powers. She used those powers to fight crime during World War II. She also fought alongside Captain America, Bucky, the original Human Torch, Toro, the Sub Mariner and the Whizzer in the All Winners Squad.

Libby Lawrence receives a bell-shaped medal that was shaped from a piece of the original Liberty Bell. When the actual Liberty Bell is rung it enhances her powers and she uses it to fight crime during World War II. She eventually becomes a member and chairperson of the All-Star Squadron and marries Johnny Chambers who is the superhero Johnny Quick. They have a daughter Jessie Quick who becomes the second Liberty Bell.

Uncle Sam is a mystical entity that is described as the “Spirit of America”. He leads the Freedom Fighters who exist on a world where the Nazis won World War II.

Joe Higgins, the original Shield, was a chemist and the son of an army lieutenant that was working on a secret formula for super strength during World War II. When his father was killed by the Germans trying to get the formula, Joe finished his fathers work and used the formula to fight the Germans.

Steve Rogers receives the super soldier serum and becomes Captain America during World War II to fight the Nazis. During a battle with the Baron Zemo towards the end of the war, he is presumed dead but is really frozen in ice after falling in arctic waters trying to stop a bomb aimed for America. He is revived by the Avengers in the modern day and continues to fight crime and represent America.