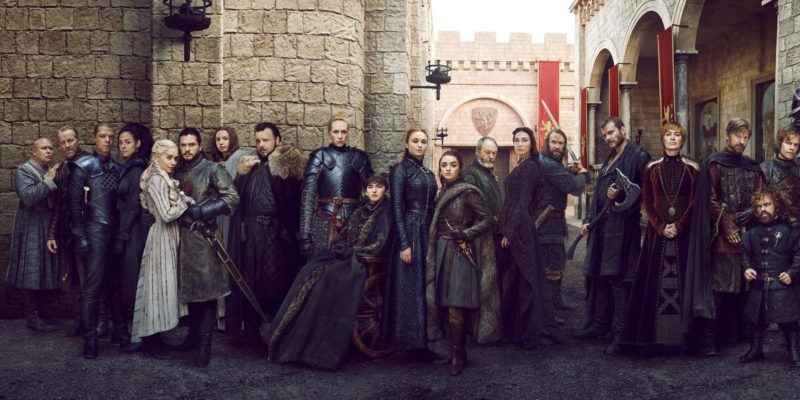 Game of Thrones, one of the most popular television series of recent time, arguably all-time. This show is so popular, you can see MEMEs splattered over social media about people who DID not watch this epic fantasy saga. Now that it is over, apparently fanatics are seeking therapy. Not since The War of the Worlds has an entertainment broadcast traumatized viewers like Game of Thrones. Most fans watched for the dragons, sex, and violence. Personally, the best parts of Game of Thrones throughout the entire series was the dialogue, foreshadowing, and the repeated theme, history repeats itself.

Dragons were like the tenth best thing about Game of Thrones. This show shocked people into fandom from episode one, and never looked back. I can remember vividly when I first watched Jaime Lannister throw Bran out of the window. First was the big risk they took with the adulterous, incest scene between Cersei and Jaime Lannister. Its shock value seemed diminished seconds later with an act of attempted murder when a “Knight” pushed a child from the window. I was instantly hooked, wondering how they would “WOW” me next. From Ned Stark’s beheading in Season One to the Red Wedding to Jon Snow being killed by the Night’s Watch to Cersei blowing up the High Septon, their fanbase jaw’s would drop week after week.

Its opening scene was as detailed as the show. If they showed Winterfell, you knew you would see a Stark trying to do the right thing. Kings Landing, a Lannister plotting their next malicious move. In Essos, Daenerys Targaryen and her dragons, while Beyond the Wall meant the White Walkers are coming. This show was as much about the villain’s journey as it was the hero’s journey, and these evil characters were just as appealing in their own villainous ways. Game of Thrones specialty was creating characters so enthralling and dynamic, fans were as excited to see how the story of B characters played out, not just main characters. “Secondary” characters like The Hound, Tormund, a wildling from Beyond the Wall who wound up as one of John Snow’s most loyal friends.

Bronn of the Blackwater, the man was promised a castle early in the series, and the fanbase was all over social media. Gendry, a King’s bastard was almost sacrificed but was set free by Sir Davos then disappeared for seasons. Again social media wondered if he was still rowing. So the show gave back, when Sir Davos, the World’s Best Smuggler,  says “I thought you might still be rowing.” This is an example of a show giving back to its loyal fandom. The villains of this show captivated audiences with their cruelty. Season after season, there were villains we loved to hate. After the first few seasons, Joffrey Baratheon seemed like the vilest character, until Ramsey Bolton was introduced, then Joffrey’s sadism seemed like amateur hour.

Hearts stopped when the Night King, the White Walkers magical leader, turned the dead Wildlings and Northmen at Hardhome before the survivor’s very eyes, but his evil was nothing compared to the heinous acts committed by the Mad Queens, Cersei Lannister and The Dragon Queen in the end. Who was the most clever man in Westeros? It Varys. You could always count on Littlefinger, the most conniving, Varys, the Master of Whispers and Tyrion Lannister, who drank and knew things to deliver the wittiest conversations. Littlefinger and Varys’ deceptive schemes were consistently moving plot points and keeping fans guessing their true motives, while Tyrion stole the show with his witty banter just about every scene. Often he was the comic relief surrounded by the most malicious characters.

The fun didn’t stop with the show for Game of Thrones fans. In between seasons, the fandom would spend countless hours creating their own theories about the show, or scouring Youtube to hear theories about the future fate of their favorite characters and storylines. Some of which turned out to be correct. One in particular, “R + L= J,” Rhaegar Targaryen plus Lyanna Stark equals Jon Snow, was an underlying theme for the entire series. These also ranged from Bran as the Night King, the world was in a Giant’s eyeball, and the story was being told by Samwell Tarly decades after these events occurred. While most of the theories turned out to be wrong, fans would not have concocted them if Game of Thrones didn’t do so many things right.

This show is not without its flaws. There were storylines abandoned and unanswered, like the mysterious Quaithe that knew everything about the Dragon Queen, yet was only in two episodes. Flaws like Melisandre, a century-year-old Red Priestess that turned old when she took off her magic necklace in one scene but was still young while wearing it with another scene. Then there was the issue with the CGI cost of the direwolves, and their lack of appearances. And of course, the war scenes. First, fans were unhappy because they didn’t show wars early on, just the aftermath. Then the dreaded “Too Dark” final battle between the White Walkers and The Greatest Army the World has Ever Seen. One of the last seasons many perceived flaws in the eyes of Game of Thrones fans.

There is actually a petition with over one million signatures to have the last season rewritten. So Game of Thrones is not above reproach from its fanatics. Complaints include lazy writing, as the majority of the last episode was callbacks to various scenes scattered throughout the seasons. Some felt character arcs were abandoned in lazy manners, such as the death scene of Jaime and Cersei Lannister. Three of the most pivotal, Arya Stark kills the Night King, Jon Snow kills Daenerys, and Bran the Broken being named King, were absolutely hated by millions because fans believe it was forced just to surprise the fans. I am part of the 1% of Game of Thrones fans that enjoyed the final season. While it had its obvious flaws, so does every television show and every movie. Any flaws I could point out are simply nitpicking.

The war with the White Walkers was too dark, yet the majority of war scenes in any genre film or television show are essentially impossible to follow. I have never cried while watching a television show. But Game of Thrones last season brought me as close as I’ve ever been when Jon Snow killed Daenerys. I fist pumped when they named Bran the Broken King of Westeros and literally leapt out of my seat when Arya killed the Night King. I especially loved the final episode because it was a callback filled episode. Characters, story arcs, and scene settings went full circle. Game of Thrones started with three men entering the North and ended with the King Beyond the Wall, Aegon Targaryen, formerly known as Jon Snow walking into the true North to start a new kingdom.

I feel bad for the millions of fans disappointed with the last season, it is a shame so many did not enjoy the end of their favorite show.

But they are only that upset because Game of Thrones climbed the ladder to become the King of Modern Television.