The Boys: The Grey Area of Superhero Universe 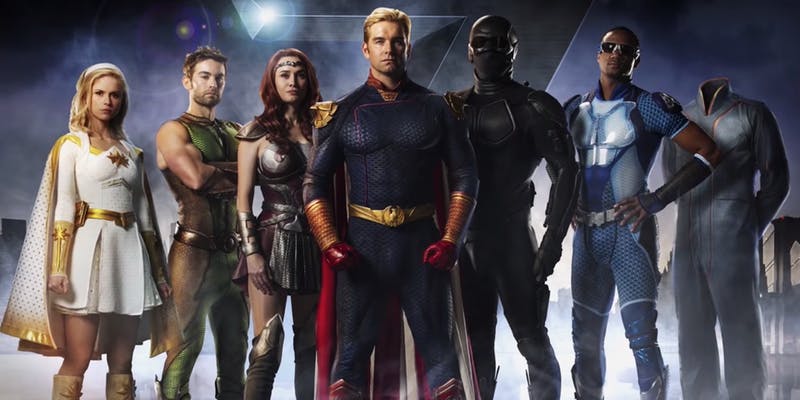 While the heroes featured in The Boys television show have familiar superpowers, the premise is unlike any other superhero cinematic universe. This show is dark, gritty, and gory with scenes not for the faint of heart. The Boys is also packed with political punches regarding sexual harassment, back door deals and blackmail, along with human experimenting.

The Boys did a great job of adding twists and turns while interweaving the storylines between heroes and villains, as well as showing the commonalities between them. By the end of the first episode, the viewers witness disgraceful sexual harassment by a male member, Deep, against the newest member of the Seven, Starlight.

This first impression reveals all is not as it seems, to both Starlight and the viewer. This is also when the perversion of Translucent is brought to light as he is revealed to be spying on Starlgiht and Queen Maeve in the women’s restroom, and it only gets darker from there. The show starts with the heroine, Queen Maeve, their version of Wonder Woman, saving the lives of two teenage boys, with help from Homelander.

The rescued boys proceed to ask Homelander, a mix between Captain America and Superman, for a selfie, and he follows that with a photo op with all the civilians in the area. This scene depicts the celebrity status of The Seven which is prominent through the remainder of the season. The story takes place in a world where the superhero team, called The Seven, are revered like celebrities by some and worshipped as Gods by others.

But not everyone loves these heroes, as collateral damage plays a key theme in this season. The Boys are a group with disdain toward the “Supes.” Billy Butcher is their leader, having been recruited by the CIA. Billy Butcher hates Homelander with every inch of his being. Billy’s wife, Becca Butcher disappeared after an affair with Homelander, and he has been on a path of vengeance leading to the final showdown.

Butcher kidnaps Madelyn, as she is the only thing Homelander cares about. Unfortunately, Homelander discovered a secret kept from him by his maternal leader, so he kills her, then flies Butcher to learn the truth about his beloved Becca. Another member of the Boys, The Female is a mute woman that has been subjected to human testing, as she was injected with Compound V, granting her super strength, speed, and the ability to heal.

She develops a connection with another member, Frenchie, and he tries to help her feel more human than freak. He is genuine in his attempt to help, and treats her like a person, a feeling even the Seven do not receive. This opening scene not only set a precedent for the level of adoration by the public, but it is also one of the few scenes in which the Seven save the day.

Unlike the Marvel and DC cinematic universes, there is no ominous threat looming over the world, except the Seven themselves. The Seven is more about public relations than heroics. Starlight gets admonished after saving a woman from being raped because the footage from the CCTV camera shows her beating up two men.

Only when the woman comes out as the victim on social media does her approval rating skyrocket and she then receives praise from Madelyn Stillwell. Madelyn is the brains of Vought Industries, as she controls the Seven. She is the person selling superhero protection to cities. In the first example of backdoor deals and blackmail, Madelyn tries to sell the services of Nubian Prince to Baltimore for three hundred million dollars, although the deal is never finished.

Madelyn gets undercut on the price by the Baltimore politician as he mentions “Compound V,” which quickly ends the meeting. Later, the politician and his family are killed by Homelander on a plane. This series of events give the viewer the first sign that Homelander is a villain wearing a hero’s cape.

But that’s not the only villainous reveal, reading between the lines, this shows Vought’s superheroes services, like the modern military industrial complex, have the sole purpose of monetization and profit, not protecting freedom and the lives of its citizens. Which is why she is pushing to pass a bill that will give the Seven a military contract.

This is the first superhero show to have civilians as much the main characters as the heroes. Hughie, a smitten lovebird follows the path to becoming a Supe Killer after A-train, the fastest man alive, runs through Robin. Robin was Hughie’s girlfriend, so Vought tries to buy his silence with forty-five thousand dollars.

When his dad tries to convince him to take the money, he says, “You don’t have it in you,” before Hugh storms out of the room. Later Translucent, the “Supe” as he is making his escape, declares Hugh doesn’t have the gall to kill him. Hughie proves them both wrong and kills Translucent. From the trauma of loss, Hughie has now crossed a line into villainy, and the viewer can empathize with this villain’s origin story.

Compound V is the Boy’s insight into addiction, but also its super serum. It is revealed Compound V creates superheroes, but it is also used for “highs.” It is disclosed that Homelander was the subject of human experimentation, and raised in a lab, his only human interaction being the doctors in charge of him.

This alludes to his dark side, including the murder of the politicians, letting an entire plane full of people die, and the eventual murder of Madelyn, having been caused by his upbringing. The doctor who raised him, whom he also killed, mentioned Homelander’s upbringing was his greatest failure, and Homelander’s actions support that claim.

It is also divulged that Homelander created a Super-Villain then destroyed a terrorist camp before framing them for creating this Super-Villain. His motive was to ensure Madelyn’s superhero bill gets passed. This revelation about Compound V was the straw that broke the camel’s back for Starlight.

Starlight and Hughie were dating throughout the season but broke up when she found out Hughie was a member of the Boys, the group that killed Translucent. After discovering the truth about Compound V, she changes her mind about the Seven as a whole, then saves Hughie from A-Train. In a twist, the viewer discovers A-train was on Compound V when he killed Robin.

A-Train’s addiction to Compound V leads to Robin, his girlfriend’s death at his hands, and eventually his near death. When another twist occurs, and Hughie saves A-train with CPR. This is a great parallel into the extreme lows addict’s will reach in the real world, and again humanizes these “Supes.”

The Boys was a wild ride from start to finish touching on political and social issues and the double-edged sword of superheroes existence in a war driven society. Collateral damage, sexism, and hidden political agendas are just a few ways this show parallels real life.

There are few characters and plotlines not mentioned in this article which lend to the quality of the Boys. The comic series differs in many ways, but also gives insight into some potential future storylines. This show has a bright future despite its’ dark tone. So, if you can handle a woman being sexually harassed, a man dying by oral sex, and a weird mom fetish, the Boys is a show you won’t want to miss, then decide if there are any heroes in this show.