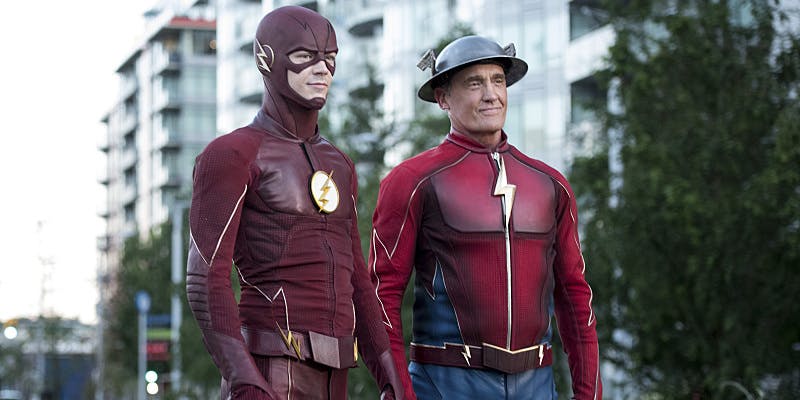 The Multiverse sounds like a cool idea but it’s really not. The idea of different universes existing that are slightly out of sync with each other yet slightly similar is intriguing. Imagine, on one Earth you are the hero of the world, yet on another, you are the worst villain and yet on another, you are the opposite sex version of yourself and on even another world you whole other ethnicity. That is the multiverse. DC Comics has a multiverse. Again. They had gotten rid of it for good reason then they brought it back. Why I’m not sure.

Let me clear one thing up I love the DC Comics universe, the characters, and the books. My favorite comic character is Batman followed by Nightwing and Black Lightning. My favorite comic storylines include The Teen Titans Judas Contract and Legion of Superheroes Darkness Saga. I’m one of the few people that actually liked the Detroit Justice League team and Morrison’s run on Justice League was classic. My favorite comic book maxi-series with crossovers of all time will always be Crisis on Infinite Earths. This was an ingenious classic that served the main purpose that was executed to perfection. This story destroyed the Multiverse.

Let me explain. When DC Comics started in 1935, they created characters like Superman Batman, Wonder Woman, Flash, Green Lantern and other. In the 30s, 40s, and beginning 50s these heroes saved the DC comic book world daily. This is called the Golden Age of Comics. Then in the late 50s, early 60s came the Silver Age of Comics and with that came new takes on some of the Silver Age characters. The new editions were used and the older ones were put away. Then in 1961, DC published The Flash #123 called The Flash of Two Worlds. This book teamed the Silver Age Flash up with the Golden Age Flash which was the first indication that there was a multiverse in DC Comics.

Soon other writers ran with this idea and DC had a mess of imaginary stories and convoluted plot lines that could not be explained. Characters who would meet in one book and not know each other in another book. When DC would acquire other characters from other publishers like Shazam from Fawcett Comics or the Charlton Comic characters they set them on another parallel universe expanding the multiverse even more. This made DC comics hard to follow at times and ungrounded which made sales easier for the main competition Marvel Comics which was based on one easy to follow universe which was more grounded.

To solve this problem, DC Comics came up with the year-long maxi-series called Crisis on Infinite Earths which would destroy the multiverse and place every character in one world. Of course, you had to kill off some characters to get rid of dead weight and redundant characters because why would you need two Green Arrows or two Jimmy Olsons. In any event, the problem was solved. For a time. The problem now is not that they have brought back aspects of the multiverse to the DC canon. The problem is that they have inadvertently brought the multiverse to the screen. Big and small.

The CW is known for having DC heroes dominate their lineup for the past 4 years with Arrow, Flash, Supergirl, Legends of Tomorrow and Black Lightning. For the past four years, Flash has introduced that within the Arrowverse, as the CW calls it, there is a multiverse. So far it has been established that Supergirl takes place in a different universe then Flash, Arrow, and Legends. There has also been no mention of Black Lightning taking place in any of the other universes. Every year there is a big crossover and this December the crossover will include Supergirl, Flash, and Arrow in an Elseworlds title crossover that will introduce other worlds. This will also bring a live-action Monitor to the screen who is a pivotal character in the 1985 – 1986 Crisis on Infinite Earths.

But it doesn’t stop there. No. In the DC Cinematic Universe in a world far far away from the CW Arrowverse, there exist another Earth of heroes and they have a totally different Flash and Superman. Characters that have shown up in the CW Arrowverse. Although the cinematic universe had their Superman first, fans wondered why DC and Warner Bros. wouldn’t use the Flash that they already had on the CW and make the worlds more cohesive. But that wasn’t in the plans. Without a scorecard and knowledge of comics, you were confused. It didn’t help any that the CW shows were being written better than the big production movies. Last year’s CW crossover Crisis on Earth X was way better put together than the Justice League movie and played out more like the comics than the cinematic universe could ever hope to accomplish.

You think it would stop there, but it doesn’t. This year, DC launched the DC Universe streaming channel which premiers the show, Titans. Titans is placed in yet another universe that is separate from the CW Arrowverse and the cinematic universe. Titans is a much darker universe which uses a lot of curse words, death and violence that helps separate it from the others. The tip of the iceberg is on Fox TV there is the show Gotham. Gotham will be beginning it’s 5th and last season and is the story of how James Gordon becomes commissioner and Bruce Wayne’s journey to become the Bat. Set in yet another universe this makes watching DC even more difficult.

The one other problem with this is that we can see how this is done right. Marvel has DC beat in this aspect once again as it has with the comic universe. The Marvel Cinematic Universe, the Marvel Netflix Universe, and the Marvel TV universe all connect and acknowledge each other’s existence. The Marvel characters under Fox and Sony Studios are exceptions at the present time but with the recent acquisitions by Disney fans are hoping to see a change in that situation. There has also not been a connection with Hulu’s Runaways and Free Form’s Cloak and Dagger but it’s not far removed that they can be incorporated into the Marvel universe mainly because there has not been a crossover in characters as DC has done.

Once again, DC has let the idea of a multiverse lessen the concept of what a great universe and characters they have. A die-hard fanboy like me can follow the different universes that DC has created and can chalk it up to DC being DC. The average everyday fan can get frustrated and confused wondering why are there two Flashes? Why are there two Supermen? Are the Batman and Alfred on Fox TV the same as the Batman and Alfred in the movies and are they in the same ones the Robin from the DC Universe streaming Titans work with? Confusing.

You know, Marvel had an alternate universe called the Ultimate Universe. When it started to get big and confusing, they destroyed it after 5 years and kept it moving.

2018-11-28
Previous Post: Open Letter to Bill Maher From a Comic Book Fan
Next Post: The Spider-Verse Is A Cool Place To Be