Hobbs and Shaw: A Long Way From Street Racing 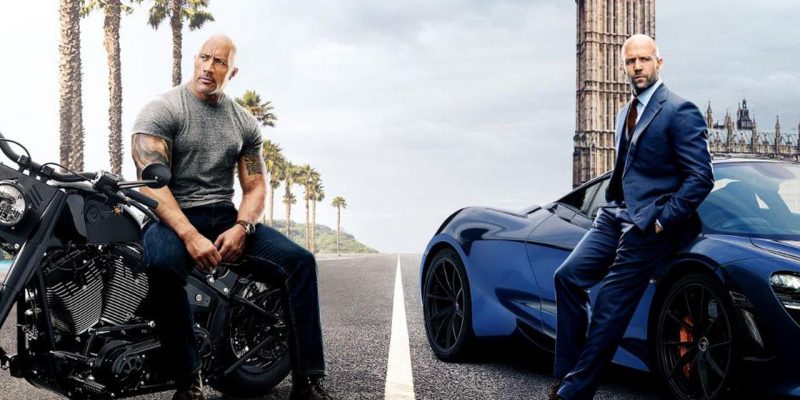 At some point since the Fast and Furious franchise began, it went from being about fast cars and racing to a superhero/James Bond theme. In 8 movies, street racers went from the hood to saving the world from terrorist.

And that’s what got us to The Fast and Furious Presents Hobbs and Shaw.

I approached this movie the wrong way. I wasn’t ready to accept it. There was no Dom, Lettie or any of the usual suspects to be seen in any part of this so how did they make this become part of the franchise. This movie starred two late comers to the franchise that weren’t even street racers.

I was annoyed. I wanted the old formula on which the franchise was built on without realizing that formula had long gone out the window. In a conversation with my son, who was 9 when the franchise started and has seen all the movies, I was told the harsh reality. “Dad” he said, “these movies haven’t been about street racing and cars since the 3rd installment.”

I had to pause for a minute then I thought to myself “dam-it he’s right”. See, I was fooling myself. Even thought the movies had a lot of racing up until the 5th installment they were still about a bigger picture. They were righting wrongs and taking down drug lords with there own form of street justice.

Then in the 6th installment they were hired by the government to take down a terrorist group that used fast cars because of course you get racers to catch racers. Which had the team fighting villains in British subways and taking down massive airplanes…… with cars. I missed the far–fetched in that I suppose.

In the 7th installment the black ops brother of the previous installment’s villain was after the team for revenge, so they had to take him down before he killed the whole group. This had the team using cars to jump from an airplane, from building to building in Abu Dhabi and fighting a militant assassin group.

A long way from fellow street racers and drug lords. In the 8th installment, the team are using cars on ice to match a submarine and teaming up with the villains from 6 and 7 to help take down a world terrorist. So yeah, the franchise has steered a long way from its roots into a different entity and I was still believing this was about cars and street racing. Fooling myself.

With Hobbs and Shaw focusing on two late comers to the franchise that have nothing to do with street racing, I was unaccepting. When Hobbs and Shaw took on a literally super powered cyborg attached to a world domination organization, I was still looking for street racing instead of what I should have been in the theatre for: having fun.

Once I took my son’s advice and looked at the movie from that perspective, my world changed along with my review of this movie. As per title, this franchise spin off was focused on the characters Hobbs and Shaw. Luke Hobbs, played by Dwayne “The Rock” Johnson, was brought to the franchise in Fast and Furious 5 as a law man sent to bring in Vin Diesel’s Dom and Paul Walker’s O’Connor.

By the end of the movie, they team up to fight a common enemy and Hobbs gives Dom and O’Connor’s team a head start before he tries to capture them again. In the 6th installment, Hobbs does come to them but not to arrest them but to ask for help tracking an international terrorist that uses fast cars in their crimes. The payment was pardons.

Of course, they take the deal and win their freedom. This leads to installments 7th bad guy Deckard Shaw, Jason Statham, coming after the team for revenge of his brother’s capture. In the 8th installment the Shaw brothers are both used to help the team defeat a common villain in a sense becoming good guys. This spin off has Hobbs and Deckard Shaw forced to team up by their governments to defeat another common villain.

Hobbs and Shaw is an action adventure comedy that uses the much-used plot device of a buddy movie where the “buddies” don’t get along. Johnson and Statham spend most of the movie arguing and fighting each other before coming together to defeat villain Brixton Lore played by Idris Elba. The undeniable chemistry between these two leading men made the movie work.

Of course, they can pull off the action scenes, but the comedic parts were pulled off just as well. The two were also joined by Vanessa Kirby who played Shaw’s sister, Hattie. The typical corny bravado lines that action stars do worked well in this movie once you consider the source and take the movie for what it is. You’re not coming to this movie for great acting, great mystery or an intricate plot.

You walk in this movie to have fun and see off the wall action stunts and that’s what you get. Rounded off with cameos by Kevin Hart and Ryan Reynolds, you get a star–studded action–packed fun movie. Idris Elba’s turn as a villain was worth it. His introducing line was a very cheesy “I’m the bad guy” which set you up from the start at the dialogue you can expect.

Nothing to deep or tense really but for this movie it worked. As I said before, I took this movie too seriously and focused on the let downs which I still must mention. One of them being the full disconnect from the main franchise. I thought that Johnson and Statham could make any action movie that had nothing to do with Fast and Furious.

The only connection besides the characters being the same from the franchise is that they briefly mention they have a past from the franchise at the beginning of the movie. I was expecting a cameo from Vin Diesel, Ludacris, Tyrese, or Michelle Rodriguez. However, with the beef between the stars from working together on the previous movies that was not going to happen. To me it is spoiled rich stars being spoiled rich stars on both sides of the beef.

Other let downs were the chemistry that wasn’t there in the forced romance between Hobbs and Hattie Shaw. Johnson and Kirby had zero scene love chemistry. But for as big a movie draw as he is when have we known Johnson to have good romantic chemistry in any film. Let down and big fail was the time change in the ending battle scene. Without giving too much away for those who haven’t seen it, you time how long dawn turns to day.

It’s actually a good laugh that I’m sure wasn’t meant to be. Yes, the spin off is a long way from Dom and O’Connor solving their problems with fast cars. Yes, this movie is more like an action adventure comedy James Bond film rolled into one. And yes, you should go see it. Don’t think too hard about the plot and go to have fun and you will.