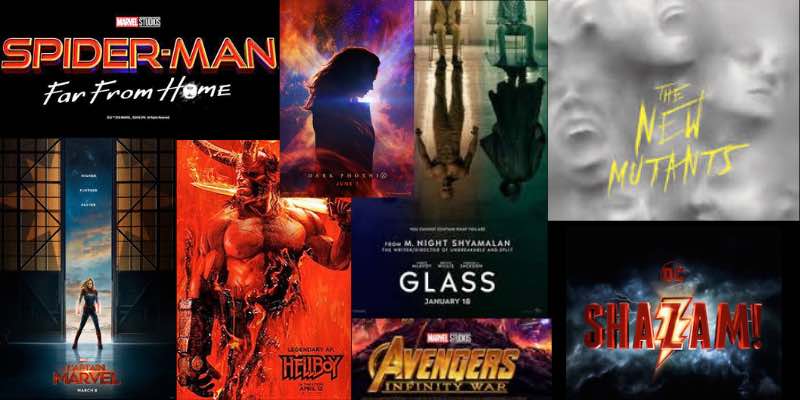 There’s going to be a lot to get hyped for in the cinema for 2019. We have an eagerly awaited sequel to a 2018 blockbuster, heroes returning to the screen, reboots, mutants, and a new powerhouse to the MCU among other great projects.

ObsidianNomad is going to give you our short take on some of these upcoming projects for 2019. Let us know what you think of the 2019 movie year.

This movie serves as the last part of a trilogy by writer/director M. Night Shyamalan after the two successful films Unbreakable (2000) and Split (2016). Using the same formula as the previous films with the same showrunner and acting talent this will no doubt be a third success.

Produced by James Cameron and Laeta Kalogridis and directed by Robert Rodriguez this movie is based on Yukito Kishiro’s manga Gunnm. Translation of manga and anime to live action has not always been successful, especially to the fans of the original. Let’s hope this movie can turn things around for that trend.

This much anticipated Marvel addition is sure to be a hit. Captain Marvel is a superhero that’s going to bring two well-needed concepts to the MCU: a female lead and Skrulls. One of the things that woke up fans about this movie is the introduction of the alien race to the MCU because of the other possible storylines that can spin out of it. Also, we get the return of Clark Gregg’s Agent Coulson back to the MCU where he belongs

The classic Disney animation is coming to live action with some great acting talent on the screen. With the names listed above, it would be conceivable that the movie will be a hit. However, with Tim Burton directing, there is a chance that the classic will take an unrecognizable dark turn as Tim Burton remake projects tend to do sometimes. I’m already a little put off that this movie is not coming from the animal point of view and seems to be more focused on the humans around him. Surprisingly enough he has not called on his main go-to actor Johnny Depp to fill yet another over animated part.

Another addition to the DCU has come and taking a hint from the trailers it seems to be along a much lighter tone than previous DCU projects. Hopefully, director David Sandberg and writers Henry Gayden and Darren Lemke can maintain the upswing Aquaman has begun to set the DCU towards. Although to some, it looks too campy, hopefully, a lighter tone will revive whatever Warner Bros. and DC Films are trying to do with these properties

Based on the Dark Horse Comics character this movie is a reboot with David Harbour taking over the title role. Directed by Neil Marshall, this movie seems to be taking a darker and gorier turn as it was given an R rating. Hopefully, this works out for them and is well received by fans.

Avengers: Endgame – Marvel Studios – Far too many stars for us to list. Know that just about every person you have seen in the MCU since the first Iron Man movie will probably be showing up here.

This is it. Endgame. After over a year wait, we get to see the aftermath of the mad God, Thanos’, snap. Now we are not stupid and there’s not total suspense on this. Due to their success and already knowing that there will be a sequel to their first movies, we know Black Panther, Spiderman, and Dr Strange will come back and be survivors. The question is how this all unfolds. We also await the reunion of Captain America and Iron Man after the events in Captain America: Civil War. Most importantly, we will be looking for a post humorous appearance from the late great father of comics, Stan Lee.

Directed by Rob Letterman and written by Nicole Perlman, this adaption is taken from the video game and is an American and Japanese joint project. With a different, more adult take on the character and Ryan Reynolds voicing the lead character this may be the cult hit of 2019.

The second live-action remake of a Disney classic in 2019 this one directed by Guy Richie and written by John August and Venessa Taylor. Aladdin has been an animated movie with a sequel, a cartoon series, and a Broadway play so a live-action remake will be filling a big shoe. I like Naomi Scott from Lemonade Mouth and Power Rangers and think she will make a perfect Jasmine and I’m hoping Will Smith can deliver as the Genie which is a big shoe to fill within the movie itself.

Directed and written by Michael Dougherty, King of the Monsters will be the sequel to the 2014 Godzilla movie. This movie marks Millie Bobby Brown’s debut in a feature film and judging from her work on Netflix’s Stranger Things I doubt she will be overshadowed by the enormous monsters such as Godzilla and Mothra.

Written and directed by Simon Kinberg, 20th Century Fox is taking another shot at redeeming the mess they have made of one of the most cherished franchises in comic book history. As a true X-Men fan from the comics, I’m not sure how this is going to work in one two-hour movie especially without any involvement from the Mastermind, The Hellfire Club, The Shi’ar and the Imperial Guard. But once again, 20th Century Fox takes its own liberties. So glad they let Ryan Reynolds have more say in the Deadpool movies.

This spin-off to the hit trilogy is directed by F. Gary Grey and written by Art Marcum and Matt Holloway. MIB International utilizes the chemistry and success Hemsworth and Thompson shared on Thor: Ragnarok. The only cameo connection you get from the previous films is Emma Thompson reprising her role as O from MIB III and the alien worms.

This sequel collaboration with Sony and Marvel Studios is directed by Jon Watts and written by Chris McKenna and Erik Sommers. The two things that stick out to me is that apparently, Peter Parker survives the snap and Tony Stark is not mentioned as prominently as he was in the first movie. Hmmmm.

Another live action adaption of a Disney classic, this one directed by Jon Favreau. From the trailer, the special effects look awesome. Bonus: James Earl Jones will be back in his role as Mufasa from the original animated movie. That alone is enough to put me in the theatre.

Directed by Josh Boone and written by him along with Knate Lee this does not seem to take the typical mutant superhero theme as past X franchise movies. I’m hesitant on this as I feel 20th Century Fox does not handle these properties correctly. I remember picking up the first New Mutants graphic novel and reading the comic until it became X-Force and beyond. You can not do a proper New Mutants film without heavily involving the actual X-Men in some capacity.

I realize a lot of people are looking forward to this movie but this movie being unconnected to the current DCU storylines makes this movie ridiculous to me. Remember that Venom movie without the main hero Spiderman? How do you expect to make a movie around a villain whose origins take place around an action from his main hero nemesis Batman? Directed by Todd Phillips and written by him and Scott Silver, I hope this movie is as good as Joaquin Phoenix looks as the main character.

Linda Hamilton was one of the nicest celebrities I have ever met at a comic con and for that, I hope her return to the franchise is a success. However, I’m not sure how many times we can tell this story. This is to be a sequel from the first two Terminator movies and skipping over the television show and the other movies because they are on alternate timelines. Yeah, really. This potential disaster will be directed by Tim Miller and written by David S Goyer. The people who made Back to the Future knew when to let the timeline flux disruption thing go, why can’t these people. SMH

2019 seems to be the year to turn any animated cartoon or movie into live action as Jeff Fowler takes his turn at directing Sonic and Patrick Casey, Josh Miller, and Oren Uziel take their hand at penning the hedgehog’s adventures. I think the bigger buzz of this movie will be how Jim Carrey will overact the main villain, Dr. Robotnik.

Another installment of the franchise directed by Matthew Vaughn and written by him, Dave Gibbons and Mark Millar. Currently, in production, this movie is set before the first movie to show us how The Secret Service came to be what it is.

Star War: Episode IX – Walt Disney Studios – Like the Avengers movie earlier this year there are just too many actors to mention. Rest assured that the usual suspects will return for another space odyssey.

Directed and written by J. J. Abrams, two points stick out to me: I finally get the return of Billy Dee Williams to the franchise as Lando Calrissian as I have been waiting for since the Force Returns and Carrie Fisher has some unseen footage that will be used. I suspect that her real-life death will be explained and done tastefully.